I met Becky Lewis in Malta on the Swimtrek training camp last year - she's an amazing swimmer and was aiming to break the British women's record for a solo Channel crossing last summer. Unfortunately, she was a victim of the terrible weather in August and missed her swim window, but then got a chance to swim at the end of September. Sadly, she didn't make the record, but just look at her go! Inspirational for us plodders.

I think she's going to be in Malta again this year, and is presumably lining up for another crack at the record. I really hope that this is her year.
Posted by Karen Throsby at 02:27 1 comment:

I'm all for swimming outdoors, but I absolutely don't do very cold, unlike these nutters....

Amazing. Insane.
Posted by Karen Throsby at 04:06 No comments: 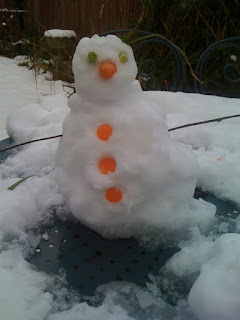 I can't believe it - it snowed again! Really, I've had enough with this winter nonsense.
Only 7 weeks to go before I'm off to Malta to get back to the open water. Can't wait.
Posted by Karen Throsby at 05:40 No comments:

My tide opens 6 months yesterday!!! I can't believe it - it seems so close, and I feel so far from being able to do it yet. But if I take a deep breath and stop flapping, I know I've still got plenty of time to build up the distance.

I'm feeling heaps better this week and am back to my full training schedule. I've been a bit slow, and have lost some endurance, but I'm recovering from sessions more quickly, and feel much more like my old self. Last Friday we did a brutal lactate tolerance session (10 x 100m max @ 6 mins), but I couldn't finish the whole set and ended up skipping a couple of 100s. I did manage to finally crack 1.30 for the 100m though, hitting 1.28 on the first one. This is a real breakthrough for me as I've been hovering around it for months. I did 1.29 at the session last night too, and even though I can't do it consistently, I feel like I'm making some progress with my speed.

I was kicking myself for not completing the set (my first rule of training is to always finish what I've been told to do - good practice for the Channel, I reckon) , but I was a complete basket case - I ended up spending the evening lying on the sofa being brought food and drink by Peter (now I think about it, not such a bad outcome after all).
Posted by Karen Throsby at 03:43 No comments:

I'm still struggling with this virus - all of the obvious symptoms have gone, but I'm left feeling absolutely wiped out. I went to the club swim on Friday night, but was exhausted by half way through, but couldn't bring myself to get out because.... well, once you start, you have to finish. So, I forced my way through to the end, but was useless all weekend as a result.

The perfect excuse to sit about, and we ended up seeing three films this weekend - the first was Up In The Air, which is hilarious, and disturbing, and has the undeniable bonus of having a lot of George Clooney, who scrubs up very nicely in a suit. Then we watched two water-based DVDs (which gives me a justification to include them in my swimming blog - George Clooney was a gratuitous inclusion about which I feel no need to apologise).

Saturday's film was The Cove - everybody should see this. It follows the fervent activism of Ric O'Barry - the guy who trained Flipper in the 1970's, and holds himself responsible for the subsequent rise in the performing dolphin industry (and its associated slaughter and general suffering). The film documents their (ultimately successful) efforts to film the killing - the footage they eventually gather is one of the most disturbing things I have ever seen. It's worth seeing just for this, but there is also some of the most amazing footage of a freediver, wearing one of those huge single fins, swimming with dolphins and whales. It's just the most gorgeous thing, and I just kept rewinding and watching over and over. If you haven't seen this already, go watch it immediately.

Then on Sunday, we watched Big River Man - the documentary of Martin Strel's swim down the Amazon. I had great expectations of this, but in the end, I found it pretty disappointing. It's a very well made film, and is a brutally honest depiction of a deeply flawed character, but I found him too unpleasant to be sympathetic, and for all that what he did is extraordinary, he doesn't really have that much to say for himself - probably because he's drunk most of the time. So we both ended up getting quite bored with the film... although his descent into madness (and even more notably that of his navigator) is intriguing in a road-crash sort of way.

In between films, Peter went out on Sunday with Penny and a bunch of others to do the 54 mile Stratford Reliability Ride through the Cotswolds. Unfortunately, at around 16 miles, Peter hit a pot-hole and went over the top of his handlebars and then Penny hit Peter's bike and flew over her handlebars and landed on Peter. They then took out the cyclist behind them (Colin), leaving everyone in a heap. Peter landed on his hands, but amazingly, doesn't seem to have broken anything, although there's obviously quite a bit of soft tissue damage as he's got pretty limited use of his arms today, and Penny is a bit sore, but generally unhurt (mostly thanks to Peter providing a cushioned landing). But poor Colin, apparently, has broken both his hands and possibly his jaw. Poor guy. Peter feels terrible about it, even though it wasn't his fault - just an accident. Everyone keeps going on at me about how dangerous Channel swimming is, but it strikes me that this cycling business is far more risky!
Posted by Karen Throsby at 02:13 No comments: