In my last post about the pool, we had just accepted the inevitable and decided to take up the wooden floor of the summerhouse and have a new concrete pad laid rather than making do with the uneven (and very waterlogged) one we discovered under the wooden floor.

Well....this turned out to be a complete success, and we soon had a lovely flat floor to work with. 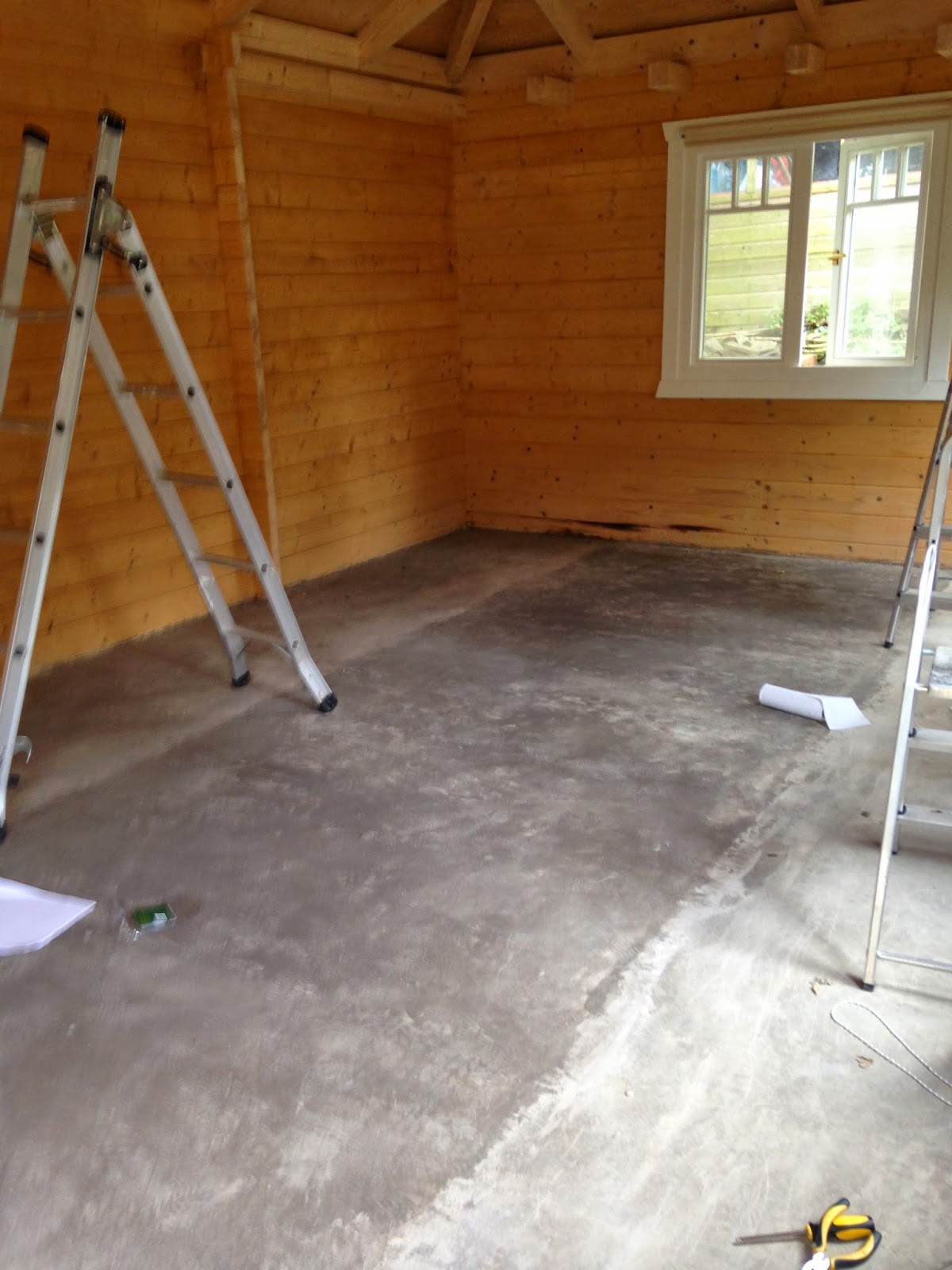 I then spent a VERY long weekend applying coat after coat of marine varnish to the entire inside to protect against the moisture....and which also ended up giving a lovely rich tone to the previously untreated wood. And finally, we laid a vinyl floor, the electrician put in lights and sockets and we were ready for the pool. 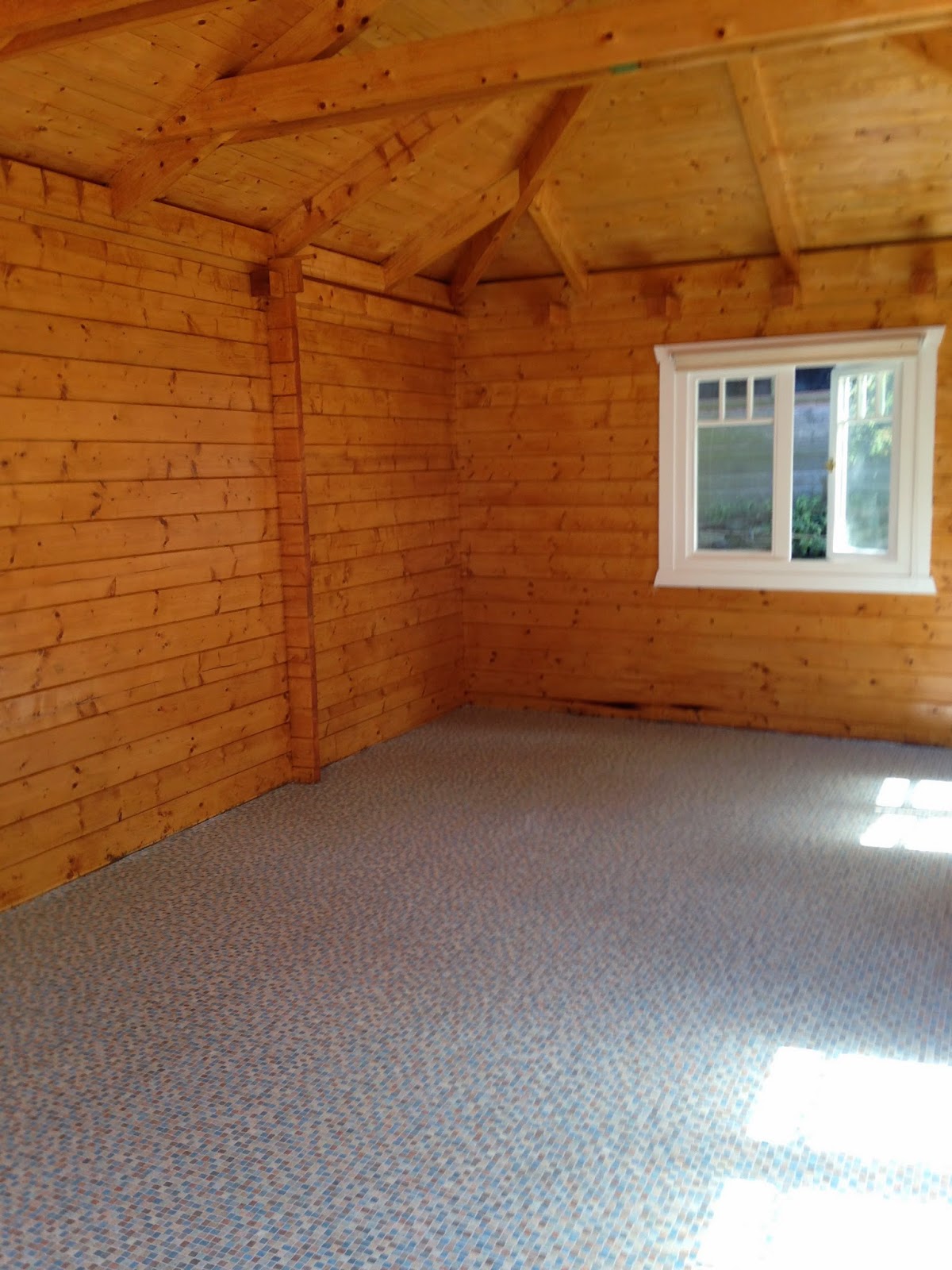 The installation team put up the metal frame and liner easily, even though it's a bit of a squeeze in there, then started to build the panelling around the edges. We had asked for this so that we could include a layer of insulation between the liner and the panels to maximise heat retention. 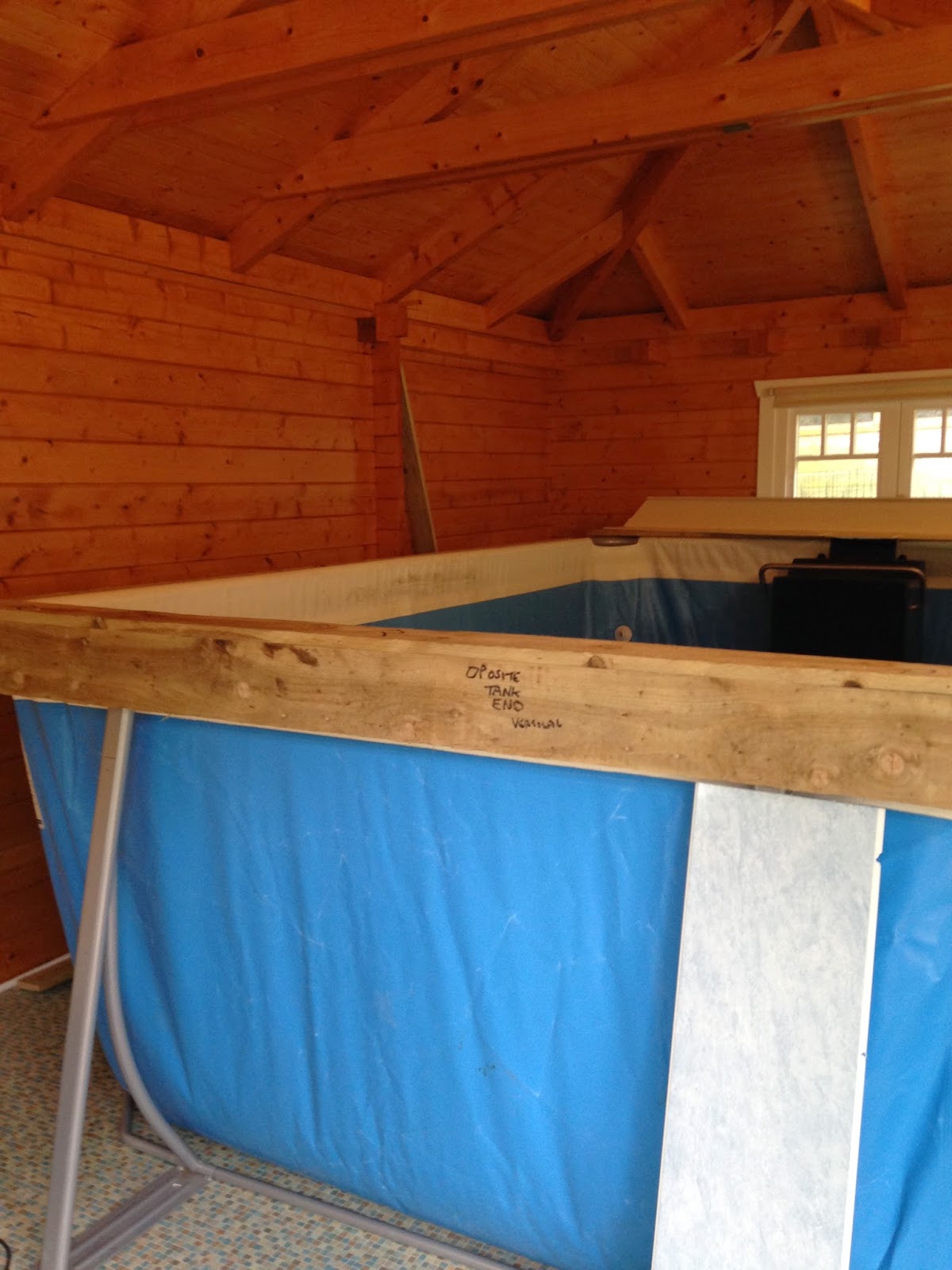 The propulsion and filter units were fitted and we could finally start filling the pool while the rest of the work continued. All very exciting. 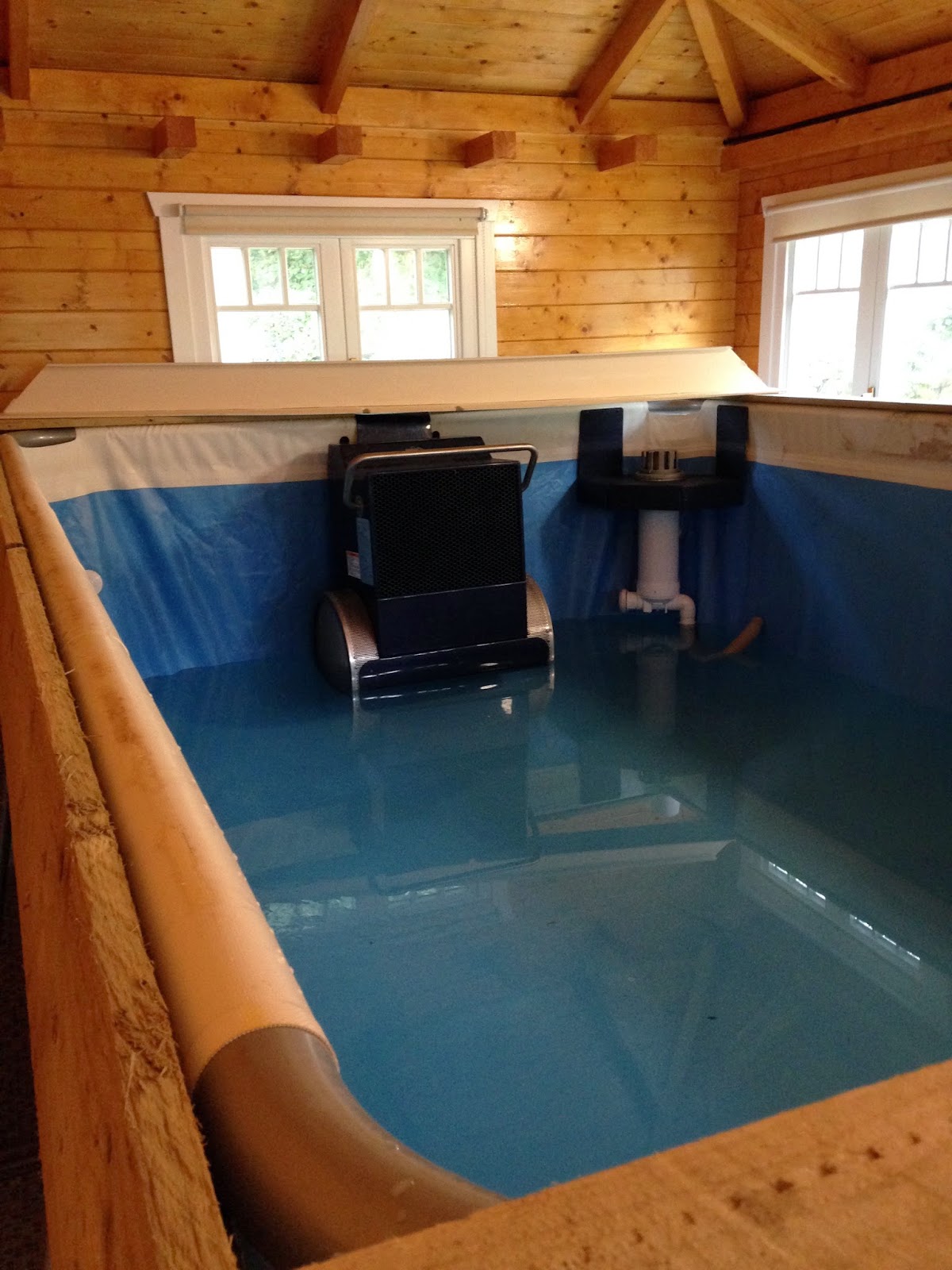 Frustratingly, this is where we hit a series of problems - not least the spectacular inefficiency and poor communication skills of the company fitting the pool. Endless Pools have regional agents who handle sales in a given area. Consequently, this agent company had a monopoly but offered a service that was spectacularly poor. It's not worth going into the details, but this included having given my electrician the completely wrong details and wiring diagram for the electrics requiring significant remedial work (and expense), and the team rarely worked more than a four hour day, dragging the job out over nearly two weeks. But 'the box' was where they really excelled themselves. Our purchase invoice included a "bespoke soundproof box"  - the motor for the propulsion unit is quite noisy and we don't want to disturb the neighbours. But what we got was a plastic storage box from Argos, lined with insulating foam to almost no useful effect. 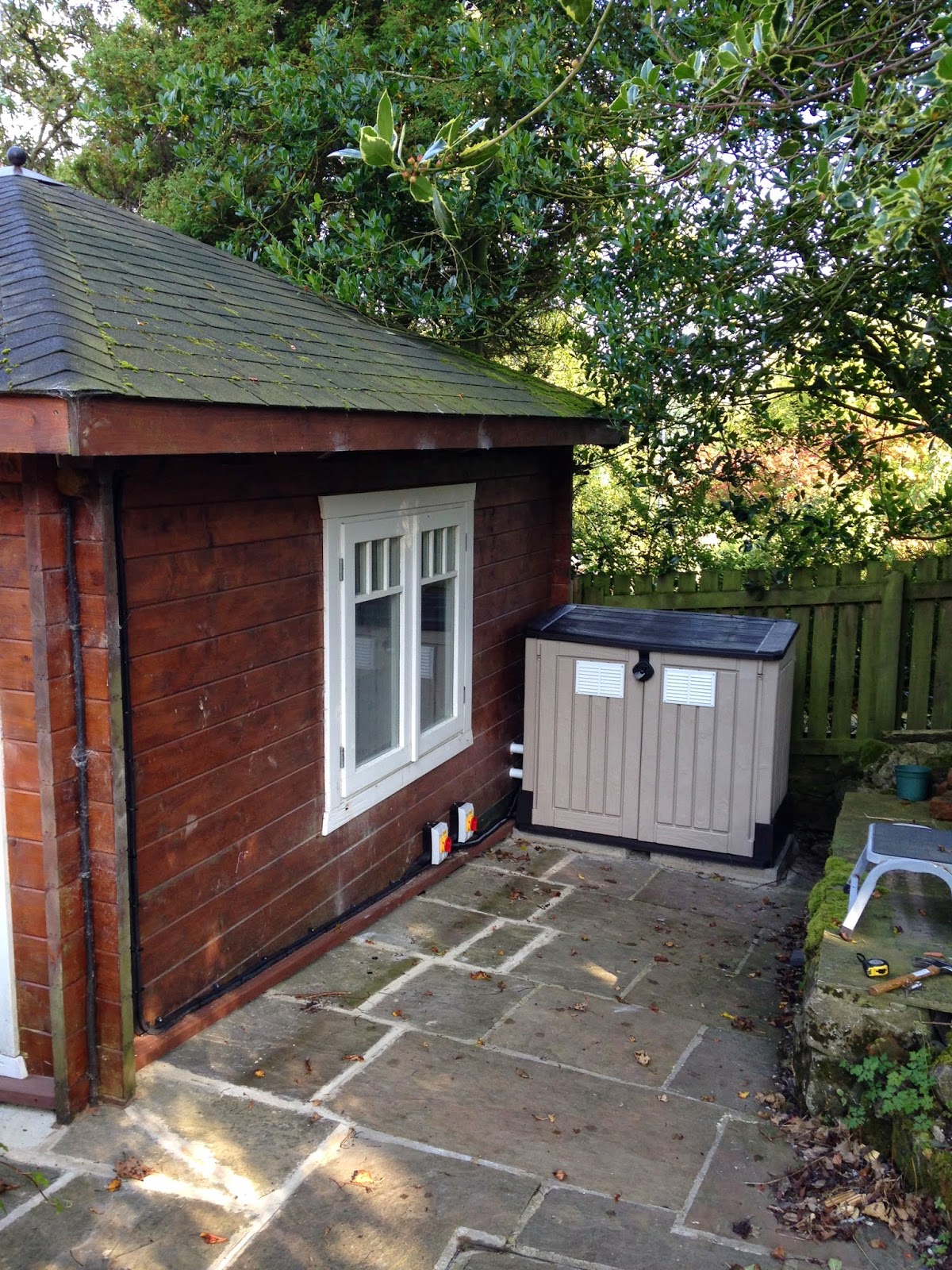 This remains a work in progress. We have abandoned the pool company as a lost cause and are bringing in a professional soundproofing company to build a soundproof fence around it to deflect the sound away from the nearest neighbours. To be honest, it's not that noisy and no-one's complained, but we want to do everything we can.

But the good news is that finally, after a frustrating couple of weeks, our pool was finally up and running. And it's just wonderful. As you can see, it pretty much fills the room - there's just enough space to run up and down the edges with a mop to wipe up the splashes - but it's quick and easy to use and it is an unimaginable luxury to be able to swim every day.  We keep it fairly cool - around 18 / 19 degrees - so it's perfect for OW training. 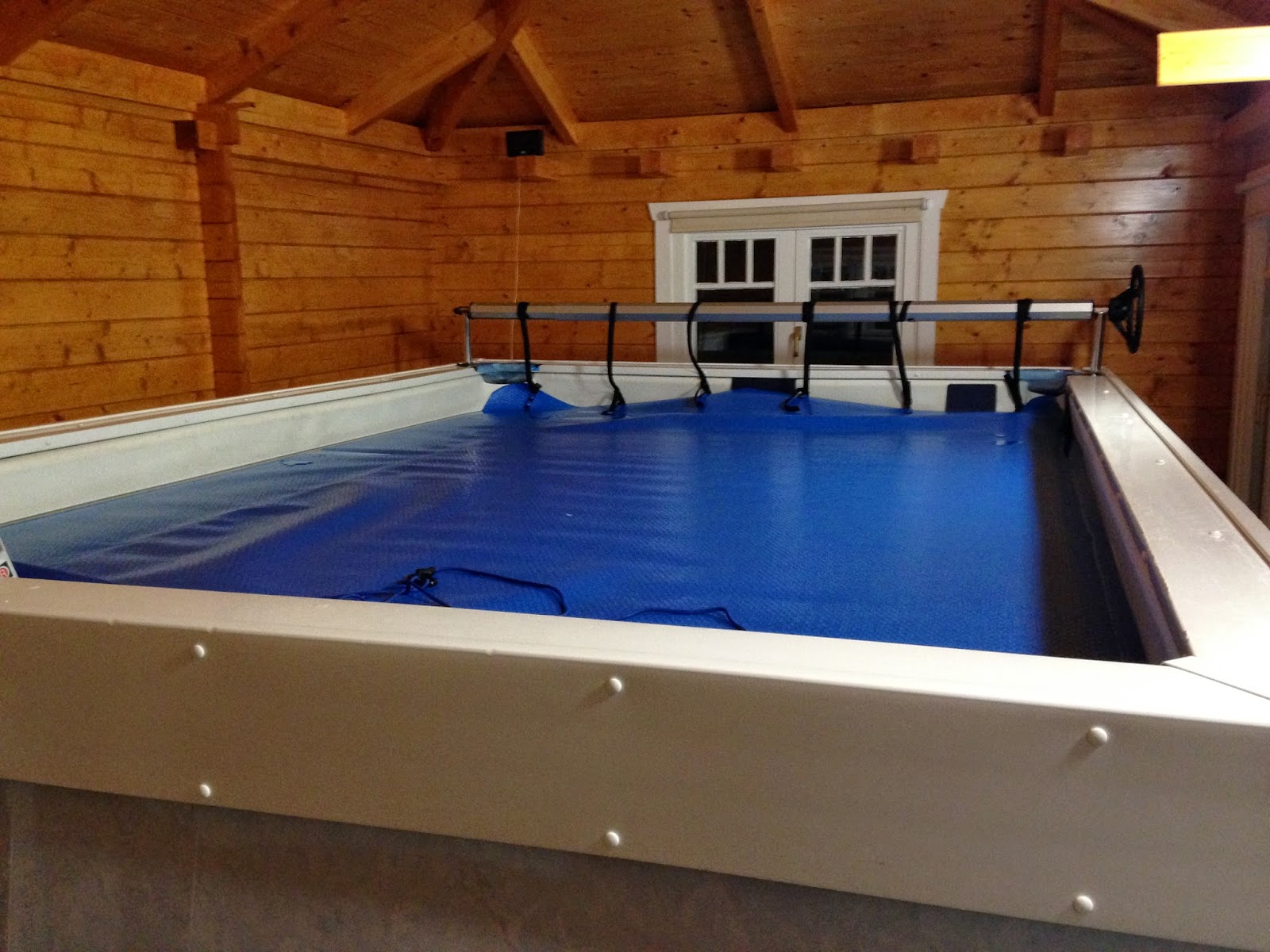 I'm still building up after my year of dealing with my shoulder, but am gradually working out how to train in this rather extraordinary environment. Expecting it to be boring, I tried listening to music while swimming, but I found it completely distracting and quickly realised that this kind of swimming is not simply a more impoverished version of a full sized pool, but is actually a lot closer to the open water - you just swim and swim. It's incredibly relaxing and the time passes in that rather fluid way that open water time passes. It's really very soothing and meditative. I'm still only swimming for relatively short periods (up to an hour), but the time flies. I just bought a pace clock so that I can introduce intervals into the mix, and I think that with some focus, there's no reason why the bulk of my training, especially in winter, can't be done in here. Time will tell. But for now, with a month of regular swimming already under my belt, I feel fitter and stronger for swimming than I have for over a year, my shoulder feels stable and pain free, and I'm starting to feel confident enough to make some plans...
Posted by Karen Throsby at 14:16 No comments: