It's been over 6 years since I started The Long Swim, during which time I've published 281 posts and the blog has been visited over 115,000 times. The blog documents the landmark swims that punctuate my marathon swimming history - Round Jersey, Jersey to France, the English Channel, the Catalina Channel, MIMS, the 8 Bridges - but it also includes a million small triumph and failures as I've bumbled my way through my unlikely and unexpected career as a marathon swimmer. I had never intended for it to go on as long as it has - I thought it would be a fun way of documenting my English Channel swim (hence, the long swim), and hadn't really anticipated getting so thoroughly drawn into the sport beyond that milestone. The blog has also been an important part of my research life, giving me a chance to document my swimming in a different register and to try out new ideas and thoughts. It has changed a lot, particularly over the last couple of years, when I've been writing much more about the world of marathon swimming rather than my own swimming, and I think I've got better at blogging as I've gone along, experimenting with different ways to talk about swimming (although I always tried not to over-edit or over-manicure the blog posts, so many of them are not as carefully crafted as they could have been). I'm very fond of The Long Swim, and have greatly enjoyed writing it.

But now, I've decided that it's time to move on and bring the blog to a close (although I plan to keep it online, and hope that it might be useful as a resource for those making their way into the sport). After 6 years, I'm not sure that I've got much that is new to add, and although I've toyed with the idea of keeping it going with just occasional posts when I do long swims every year or so, I don't like having it sitting there unkept and I don't want it to start feeling like an obligation. The 8 Bridges seems like a good note to end on, and with my book manuscript ("Immersion") going to press shortly ready for a spring 2016 release, this feels like another natural point of closure.

My final motivation for bringing the blog to an end now is that after years of studying and writing about swimming, I would like it back as a more private thing. Sharing it all has been enormous fun, but it has also had costs, especially as the readership has expanded, leading me increasingly to have to censor myself on particular topics that I feel strongly about in order to avoid some of the more intemperate backlash that thrives in the online world - something which inevitably takes some of the fun out of  blogging. So now feels like a good time to make my swimming less public and instead to savour it as the the closely held, personal joy that swimming is for me.

This is only an end to the blog, and most definitely not to my swimming, which I plan to continue enjoying to the full for as long as I am fit and able to do so. I'll also be keeping my Twitter account going for the time being (@thelongswim), and will continue my ongoing friendships with swimmers around the world over social media and wherever possible, in person.

Thanks to everyone who has visited the blog over the years, and for all the positive feedback - it's been a wonderful 6 years. Hope to see you all in the water soon. 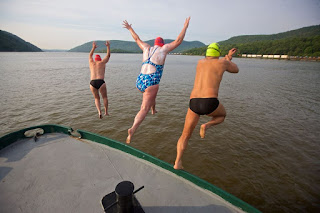