I made my first trip down to Dover this weekend....happily coinciding with the warmest weekend of the year. I timed the drive down really badly and ended up crawling round the M25 at a snail's pace, getting very hot and bothered. But I slept like a log and woke up feeling fresh and ready to go, arriving down at the beach by 9.30, ready to submit my paperwork and get the card which everyone needs in order to be able to swim. Hats off to the beach crew - they've done a great job of setting up the new system, which goes like clockwork.

Cliff Golding brought everyone to order with a whistle, and announced that for only the second time in 20+ years, Freda was absent due to illness (although we were assured that she'd already phoned several times, and he wasn't convinced that she wasn't watching us via the webcam). I really hope she's better soon - it didn't feel quite right without Freda there. He announced that the relay swimmers would do 2 x 45 min swims, and the solos would do one swim of 5km or 1.45, whichever came first. I got Vaselined up and made my way down the beach to the shoe-bag, dropped off my shoes (now adorned with sunflowers for easy identiifcation) and hobbled my way into the water. In spite of the promise of sunshine, it was a dark, cloudy day, and the water looked rather uninviting; as I waded in, the cold bit at my legs - it was 10.8 degrees, I was told. But in the end, there's no way out, so in I plunged. This first ten minutes was not the finest moment in my weekend - I struggled to regulate my breathing in the cold, and my stroke was awkward and poorly timed at first as I adjusted to the temperature. This led to the inevitable inadvertent mouthful of sea water, which I accidentally swallowed and then threw up, along with breakfast. I spent the next 20 minutes feeling very sorry for myself indeed and trying to think of excuses to get out, but fortunately, the imagined shame of it was just too great, so I gave myself half an hour to reassess my situation. Of course, by the time I'd finished my first full lap, I was feeling heaps better (and the sun had started to sneak through the clouds, which really helped). The second lap was better, and I completed the 5km (2 full laps, plus up to the sloping wall and back) in 1.40 before staggering back up the beach to begin the frantic shivering and slow rewarming.

Sunday started much more positively - brilliant sunshine and a cloudless blue sky. The water wasn't much warmer, of course, but it felt SO much better having the sun on my back. Every time I went down to Dover last year I made at least one beginner's error, and I began this year in a similar vein - on Saturday, I hadn't greased under my shoulder straps, and had developed huge welts at the base of my neck that were REALLY sore. Irene slathered them in globs of Vaseline on Sunday, but I think I'm going to be paying for that for some time - at least the pain of the salt water hitting the chafed spots took my mind off the cold water. This was a much better swim for me all round - a straight two hours, but with no real problems. As always, it took me an hour or so to settle into my rhythm, but the time flew by. I was a bit slower than yesterday and was probably dawdling a bit too much, but it felt really nice to just swim in the sunshine.

I really feel like the run up to my Channel swim has started now. Not that I'm keeping count...but it's exactly 12 weeks today to the start of my tide!

In the mean time, the lakes here are warming up splendidly - Swan Pool was a toasty 16 degrees last night, and I had a lovely 90 minute swim under clear blue evening skies. I probably need to start spending a little less time enjoying the scenery and more time pushing myself a bit, but sometimes it's nice just to paddle.
Posted by Karen Throsby at 01:16 1 comment:

Oh happy day - the sun is out, and the water is warming up even as I type. I went to Swan Pool on Monday evening and it was just beautiful - gentle evening sunshine on my back, lovely still water, tweeting birds... this is how swimming should be. I was so happy, and felt like I could swim forever. The warm weather's supposed to extend into the weekend, so hopefully I will have a gentler induction into the Dover training weekends than those hardy souls who started at the beginning of May. What a fair weather swimmer I am!

On a very different note, I was interviewed this morning by a features writer who is writing a piece on my Channel swimming research for the Guardian's "Research notes" section. I don't think I did a great job of explaining the project and definitely need to get better at that. But what really took me by surprise was his interest in the whole weight-gain issue - lots of questions about my own (fairly modest) weight gain - how much, what I ate, how I feel about it etc. In one sense, I don't mind talking about it because it's an important part of the process (for me, as a not particularly fast swimmer, anyway), but it's also a bit weird to think about that going into a national newspaper! From a research point of view, it's fascinating to see what captures people's interest and it really makes me realise just how potent the whole issue of body size is in this current fat-phobic moment of anti-obesity obsession, but it's also very strange to me for my own body to be at the centre of these discussions - in my previous research on obesity, I was very much able to set myself outside of these debates. It's an interesting experiment for me - this whole project is such an adventure.
Posted by Karen Throsby at 04:53 No comments:

Okay...enough with the cold. It's May 17th, and quite frankly, I feel like we're owed some decent weather. You expect the beginning of the open water season to not be particularly warm - frantic lakeside shivering, followed by spilling hot soup all over the inside of the car because you're shaking too much to get it successfully from flask to cup and then cup to mouth is all part of the ritual. But I had to defrost the car windscreen on Tuesday morning before driving to the pool, which is just ridiculous, and Bosworth is still stubbornly hovering around the 11-12 degree mark. But the forecast promises some wate-warming sunshine this week, so I live in hope.

In the mean time, I have recovered from my previous wobble and am now back focussing on the task at hand. I went up to Swan Pool for the first time this year last week and managed an hour in 10 degree water, which felt like good progress on my part... although this also let to the unfortunate soup-in-car incident. Tomato soup too - the car looked a bit like I'd been slaughtering livestock in it. And then I went to Bosworth on Saturday (a balmy 12 degrees) and did the full two hours. I think I probably stayed in a little bit too long and this is probably the coldest I've been; it was only after a couple of hours under the duvets at home that I felt properly warm again...but then again, I was really overtired, so was looking for an excuse to go back to bed anyway. But it felt good to have stuck it out, and it was definitely made easier by the sun poking through half way through the swim.

On a very different note, I managed to set new PBs for 50m and 200m last week, so things feels like they're coming together generally with the swimming. (No need to alert the swimming authorities about the toppling of these PBs - I am still thoroughly mediocre when it comes to any speed-related task).

So, it's all good. I feel focused and enthusiastic, and physically, I'm feeling great with no injuries. And to today is exactly 3 months to the start of my tide!!!! In honour of this, Bob (the campervan) has been hosed down, scrubbed up and stocked with food, ready for my first trip of the year down to Dover this weekend.

What the hell is going on with the weather? By the time I got to Bosworth at 7 this morning, the air temp was 7 degrees, and the water temp 11 degrees. Plus, there was a lovely stiff breeze whipping across the lake, and dark, low clouds threatening rain. This really isn't helping. But, I'd gone with renewed purpose this morning, after a rather lame week of doubt and general wobbliness, so in I went... although maybe not quite with the committed certainty that I was aiming for....

It felt cold, cold, cold... completely with full ice-cream headache and clawed hands. But I managed 1 hour 20 mins (c. 4km), which felt like a positive outcome after such a slack week. Ali Longman was there too, and we both spent a good half hour shivering spectacularly over hot chocolate afterwards. Then I retired to the campervan (Bob) for coffee while I was waiting for Penny. She did an hour in the water, then set off, cold and wet in her tri suit, for a 1.5 hour run. Amazing. When she got back we tucked into beans on toast before driving home. Life is better with Bob in the picture - the more comfort the better in my book .

Nothing left but the swimming... 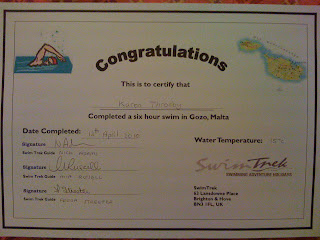 Well...my 6 hour certificate and my completed medical certificate have been dispatched to the CS&PF, which means that my registration and paperwork is now complete. Nothing left to do but train and swim!
And speaking of swimming....I'm finding this really hard at the moment. I've done three lake swims, all at Bosworth, since I got back from Malta, each one longer than the last. On Saturday, I managed a full two hours in 13.5 degree water, but it was a difficult swim. I wasn't as shivery when I got out as I had been the previous Saturday, but felt SO cold the whole time, and nearly gave up and got out after the first hour. It doesn't help that the weather has now taken a distinct turn for the worse, and it's only 10 degrees outside at the moment, which makes it even harder to contemplate heading off to Swan Pool tonight. I had been planning to go yesterday morning, but the weather was disgusting and I bottled out, so I really have to go today before this becomes a thing. But I'll certainly be relieved when things start to warm up!
As Penny said this morning about her Ironman training, as she headed off with Peter for a 4 hour ride (after she'd done a half-iroman distance in training on Saturday!), it's supposed to be hard. It certainly is this week.
Posted by Karen Throsby at 04:38 2 comments: