Sport England recently launched the "This Girl Can" campaign, spearheaded by this video featuring 'real' women working out in a variety of settings.


The rationale for the campaign is that"fear of judgement is stopping many of us from taking part in exercise". The campaign, we are told, "is a celebration of active women up and down the country who are doing their thing, no matter how well they do it, how they look or even how red their face gets". "EVEN how red their face gets"? Is this really the worst fear that women face?

I'm all for finding ways for anyone who wants to exercise to do so safely and comfortably, but I think that this campaign is hugely misguided.

Firstly, why "girls"? The campaign is aimed at adult women, so what is to be gained from infantilising them? The fact is that for all the rhetoric of getting out there and doing our "thing", physical activity and womanhood are still such an uncomfortable pairing that women are only allowed to imagine themselves active as "girls".  I'm 47 years old and being a "girl" is far from an aspiration of mine.

Secondly, the video is not about freedom, or enjoyment of our bodies; it's about sex....or more precisely, being sexy to others. As this smart commentary by Jessica Francombe-Webb and Simon Fullagar observes, the campaign is all about women's flesh and the objectification of women's bodies. The message is that exercising / sweating / moving can be sexy even though you might have feared before that it wasn't. All this does is reframe what might count as sexy, rather than reject the premise that being sexy to (presumably male) others should be the first concern of women. The textual message overlaying the images compound this objectification: "Sweating like a pig, feeling like a fox", reads one; another declares, "Damn right I'm hot". Being infantilised and sexualised is not my idea of empowerment.

My third objection is the individualised nature of the campaign. It urges women to not allow the fear of judgement to stop them from exercising; the implicit message is that it is silly self-consciousness that has stopped women becoming the best they could be. But women are right; they ARE being judged, and it can be very unpleasant. It is not the job of women to learn to ignore the intrusion and harassment that they routinely endure in public spaces, including when exercising; this requires a more wide-reaching, collective action against the judgement of women's bodies and threats to their right to take up space. I think that projects like "'Everyday Sexism" are doing a really good job of drawing attention to these issues, and it's important that campaigns like "This Girl Can" don't just end up coaching women on how to tolerate or defy public judgements and harassment. It's our space too.

And my final concern relates to this poster from the campaign: 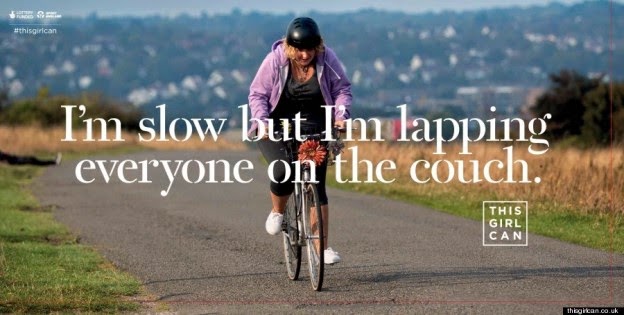 Sport and physical activity have a moral status in contemporary society; they are seen as a 'good' thing to do, and those people who do them are socially rewarded. This is built into this ad; the cyclist is attributed a higher status than "everyone on the couch". This is a problem because, firstly, as a friend and colleague of mine pointed out, there are many reasons why someone might be on the couch rather than cycling - illness, depression, exhaustion from work, childcare responsibilities...or maybe they just don't like cycling. This points back to the individualised nature of the campaign, and ultimately divides more than it provides a collective feminist consciousness. And secondly, it reproduces the superiority of the sporting body unquestioningly. For some people, sport and physical activity will make them feel better, enable them to have fun, give them time to themselves....or with others... But it doesn't make them a better person than someone who doesn't do sport.

I love (some) sport as much as the next person (although I can't think of anything I'd rather do less than a zumba class... horses for courses). And I want people who want to do sport but can't for any one of a number of reasons to be able to. But we need to accept that women's low participation in sport is not simply a question of individually getting over self-consciousness or low self-esteem; and nor should women have to endure being infantilised and sexualised in order to earn the right to get out there.

I think this campaign is well-intended and I know that a lot of people have enjoyed watching it, but it's very wide of the mark, and constitutes a very conservative, regressive portrayal of women whilst masquerading as radical and progressive. It may be that "this girl can", but this woman won't be exercising to feel like a fox any time soon, thank you.