Cold feet and too much thinking time... 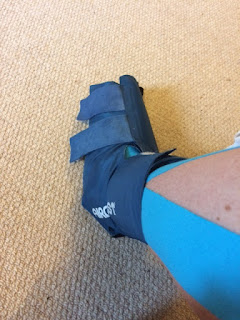 I've spent large parts of the last 10 days with my foot in this. It's a cryocuff - a wrap-around 'boot' that inflates with iced water run in through a valve from a cooler, providing compression and cold to aid healing. I take it off before I go to bed, and have to go to sleep with a woolly sock on or it's a bit like sleeping with a dead fish at the bottom of the bed until my foot warms up. The good news is that it's working, but oh....so....slowly. It's exactly a month today since the ridiculous, clumsy slip in Geneva that had such costly and enduring ramifications - the wasted year of hard training, the financial costs, and the ongoing problems of mobility that being on crutches and unable to drive are causing. My physiotherapist estimates that it will be another 2 months before the ligaments are fully repaired (or as repaired as they can be - he reckons about 70% recovery of strength is normal). It constantly amazes me that my body, like all bodies, can be incredibly robust while also being intensely vulnerable and fragile; it seems like a high price to pay for a 2-inch slip, but sometimes that's all it takes.

Before I go any further I should say that I know that none of this, in the grand scale of things, is important or disastrous. Not being able to do a 42 mile swim - a leisure activity funded by my disposable income and enabled by my (generally) high levels of health and well-being - is the definition of a first world problem. Nothing terrible happened here. But having said that, you need to bear with me while I indulge in just a little self-pity. I had considered not being able to swim because of the weather (although this is unlikely in Geneva), or even having to cancel earlier because of acquired injury during training, but I was utterly unprepared for the possibility of not being able to start the swim because of an acute injury so close to the swim. Consequently, although the couple of weeks immediately after the injury were filled with the more pressing and occupying demands of the injury itself and coping with my work trip to Barcelona, I was really knocked for six when I got home. I wasn't expecting this, and didn't even really register how sad I was feeling for a while, but I slowly realised that I felt embarrassed by what had happened, and very down in the face of the rather exhausting work of the everyday and my newly acquired dependence on others to get around and look after myself.

As the new teaching term has started to kick into gear, and as my foot (and therefore, my mobility) is slowly showing signs of improvement, I am feeling much better and much more positive, and I have a much better sense of perspective on the whole affair. It's a good learning experience about the vagaries of the swimming, the riskiness of big plans....and the fragility of ankles.

And so...one consequence of the cryocuff and my immobility is that I've had far too much thinking time and that can only end up one way. On some level, I had hoped that I was sufficiently grown-up to be able to look back on the Geneva venture as a good idea that just didn't work out and then move on; I didn't want to feel compelled to go back and have another try. I think 'unfinished business' is a dangerous game to play, since it massively raises the stakes of the second time around in ways that probably aren't healthy emotionally and which risk leaching the fun out of the whole process of training and swimming. This, after all, is why I do it - because I love the swimming. But then again, I also came to realise that my desire to go back to Geneva was not so much (or at least not only) about redemption from this year's failures, but also about the very real desire to do the swim - to swim here: 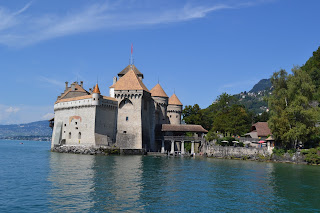 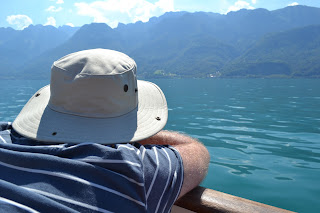 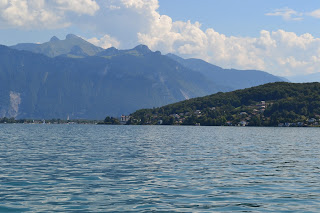 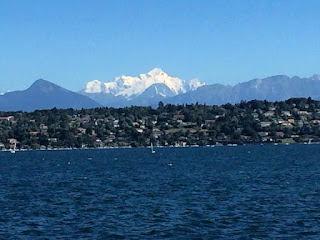 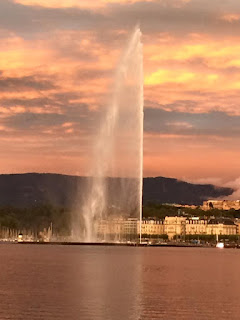 And so it's done - I'm booked in for August next year for Lake Geneva II. And this time, I will be wearing walking boots and wrapping myself in bubble wrap in the days leading up to the swim!
Posted by Karen Throsby at 08:19 1 comment:

A recent article in New York magazine's "Science of Us" section, entitled "The obscure ultra-endurance sport women are quietly dominating" has recently been doing the rounds on social media and discussion forums. Many swimmers are relieved to see women's participation in the sport recognised (which I also share), and there has been much enthusiastic listing of other notable female swimmers not mentioned in the article but celebrated in the community. The article begins from the premise that unlike other ultra-endurance sports, women are 'dominating' in a way that is unlikely in, say, ultra-running, and this is ultimately attributed to the assumption (a) that women have more body fat than men, and (b) that that body fat provides a critical advantage that explains their success in the sport.

At the risk of being a killjoy in the face of an article that I know many find affirming and positive, I have a number of concerns about its claims. Firstly, what does it mean to 'dominate' a sport? In fields conventionally understood as masculine (e.g. business, politics), even a small number of successful women is quickly read as 'domination' -a marker of alarm at the disruption of business as usual. Although well-represented relative to many other sports, women are still vastly outnumbered by men in marathon swimming, and the fact that even the possibility of female parity in performance / participation warrants research articles and news stories shows how far we are from 'domination'. Although much more subtle than actively excluding women from those fields, the rush to cries of 'domination' is another means of constraining women's participation in public life by marking it as out of place.

Secondly, I am deeply uncomfortable with the rush to biological explanations. Women's high performance (in sport and other public domains) is often attributed to their bodies (high pain threshold, favourable fat distribution), but much of this is based on (unfounded) generalisations that can't be brought to bear on the very small numbers of marathon swimmers, about whose specific bodies we know very little. It is striking that the journalist (and the scientists researching this) don't stop to look at training regimes and preparation, for example. And I'm not saying that women necessarily train harder....my point is that there are other conclusions that could have been jumped to but which aren't. Consequently, we should be very wary about citing women's presumed body fat as a performance advantage. Firstly, it obscures the work of training and technique acquisition (a point made by Evan Morrison in the article); and secondly, in a social and cultural context where fat is constantly derided, this is a punch with a velvet glove. Indeed, the article cites a horribly fat-phobic encounter between Lynne Cox and a taxi driver who tells her that she is 'too fat' to be a Channel swimmer. The implied derision and unacceptability of fatness, and the freedom which this man felt to hurl what is undoubtedly intended as a casual and disciplining insult at a young girl, should make us all very wary of these seemingly celebratory explanations of women's biological advantageous body fat.

The rush to biological explanations for women's relatively high participation in marathon swimming (particularly compared to other ultra-endurance sports) obscures a number of other social explanations. Swimming is conventionally understood as a sport appropriate for women (unlike something like boxing, for example, or rugby, which are far more rigidly masculinised and harder for women to break in to). Consequently, it is much more likely to be experienced by women as a potentially welcoming and safe sporting space already populated by other women. But secondly, the higher average performance of non-elite female swimmers in events such as MIMS may well reflect the fact that it is the stronger female swimmers who are more likely to identify themselves as participants for ambitious or high profile swims. Women are not taught to see their bodies as athletic or adventurous, and they also pay much higher social costs for standing out or pushing themselves forwards, especially if all doesn't go well. Consequently, women are much less likely to enter such an event without being particularly confident about their abilities. I suspect that the women who have traditionally taken part in MIMS (an event where you had to push yourself forwards aggressively to even be accepted) were already among the better swimmers, and it was this high performance that facilitated their self-identification as MIMS competitors and their successful swims....and not the fatness of their thighs.

I have some sympathy with the journalist of the piece. As one of my favourite swimming journalists and writers, Elaine Howley, noted in a forum post on the article, the demands of publication are for spectacular headlines and short punchy claims within tight word limits, and there is little scope for nuanced analysis. As coverage of women and sport goes, this is an engaging and carefully written piece. But in my view, however inadvertently, articles like this end up reinforcing the egregious inequalities in our expectations of women's bodies rather than challenging them.