Despite my best intentions, I still didn't manage to do much this week - mostly because I've spent most of it going to workshops and meetings. I was also giving a paper on Friday that I ended up writing in the couple of days before, and which ended up gobbling up a lot of swimming time (although it was a fun event, so I don't really mind).


But the good news is that the lake at Market Bosworth opened up to swimming today, courtesy of 1485 Triathlon Club who organise it all each summer. 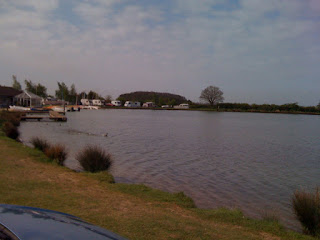 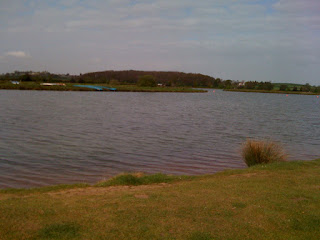 Because of all the sunshine we've been having, the lake temp was 14.1 degrees (although I think they take it at the water's edge at the surface, because it always feels much colder than they say). Anyway, this meant that I could swim without a wetsuit (the sessions are governed by BTA rules, so anything over 14 is fine), but I'd taken my wetsuit along anyway, just in case. This was a mistake, because when I got there, everyone was getting into wetsuits, bootees, neoprene gloves, multiple caps etc, and just seeing everybody made me feel like it must be really cold. I really wanted to be able to swim for a full two hours, so I was a bit feeble, and ended up wearing my wetsuit for the first few laps, but I soo started to feel uncomfortable in it after being so used to swimming without one. So, I got out, took it off, and jumped back in for 5 more laps (approx. 800m each). It felt lovely to be back in open water.
Posted by Karen Throsby at 15:10