So did you make it round Manhattan?

Well yes. And no. Who would have thought that it was such a hard question to answer, but the truth is that I both did, and didn't, swim around Manhattan last Saturday. 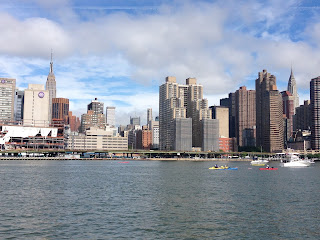 It has the makings of a long story that I don't want to get too bogged down in for fear of losing the mass of positives that are embedded in an ultimately unsuccessful swim. But, in short (and as far as I understand it), an unfortunate confluence of missing pilot boats, the after-effects of Hurricane Sandy, communication and logistical problems and some general last minute mayhem led to a late race start. In addition, the flood tide in the East River, which speeds the swimmers up towards the Harlem River in the early stages of the swim seems to have been weaker than expected, probably as a result of the torrential downpours the day before. This constellation of factors resulted in a large portion of the field getting caught by a powerful, rain-swollen ebb tide before they reached the safety of the Harlem, forcing them to be pulled out of the water at or before Hell Gate and 'repositioned' a mile or so further up the course before continuing. Only 11 of the 40 starters were able to beat the tide turn and complete the event with an official time; these were the very fastest swimmers in the field, and there were some tremendous performances from this group on the day. Most of the remaining field, including me, completed the rest of the circumnavigation after the repositioning, and were categorised as having done a 'boat assisted' swim. And so it is that I both did, and didn't, swim round Manhattan last Saturday. 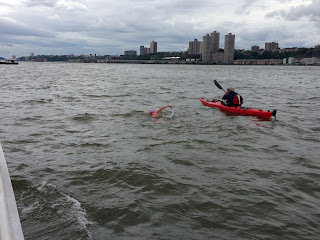 I'd be lying if I said it wasn't a frustrating experience. Given my performance on the day, if we had been able to start on time there’s a good chance that I would have beaten the tide turn and completed an officially sanctioned swim (and in doing so, the marathon swimming Triple Crown of the English Channel, the Catalina Channel and Manhattan). But this is a sport riddled with risk, uncertainty and in some moments, very narrow margins for error. At the end of the day, then, I think that we were the victims of a perfect storm of weather, circumstances, some human error and plain old bad luck. Sometimes, this is how it rolls, although no matter how determined I am to maintain a state of sangfroid about it, the memory of the dawning realization that I was losing to the ebbing tide, followed by the order to leave the water, still makes my stomach knot. In those moments, it’s hard not to regret all the time, money and effort that went into this, even while accepting that this is the nature of the beast.

So I feel sad that I (and so many others) didn’t complete an official swim, but not angry or recriminatory. For me, it’s one of those things, and if there are lessons to be learned, then hopefully that work can be done collectively among organisers, boaters, volunteers and swimmers in the coming months.

And this is only half the story, half the rollercoaster of a day. The other side of the coin is the tremendous positives that also marked the experience…. [See Part II] 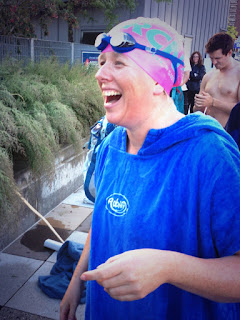