Swimming with dolphins in Windermere

Last Friday saw the second stage of my post-non-Channel swim, pre-MIMS II training strategy - a one-way Windermere swim. I was very grateful to Colin Hill (of Chillswim) for fitting me in at quite short notice and excited by this chance to keep building my slightly dented confidence and get a good hard swim in by way of training. My preparations that week hadn't been ideal. From Sunday - Tuesday, following my bout of Thames' revenge, I'd eaten nothing but small sips of yoghurt and nibbles of plain boiled rice until I eventually achieved a somewhat cautious detente with my intestines. And then on Wednesday and Thursday I'd turned to a little-and-often refuelling strategy so as not to put my innards under too much stress but hopefully to give myself enough energy to do the swim. And happily, by Friday morning, I felt good and ready to go (or as good and ready to go as I can be when getting up at 4am).

By 6-ish, we were on the dock at Fell Foot loading up the boat, slapping on suncream and looking forward to a good morning's swimming (even though I look distinctly unsure about what's to come in this pic while Steph happily slaps on suncream). 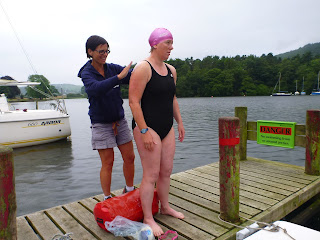 The water was warm (low 20's throughout) and clear, in spite of the recent rain - I have no idea what's going on in this pic, but I obviously found something to look at before I finally started swimming, with Dave and Colin providing support from the boat. 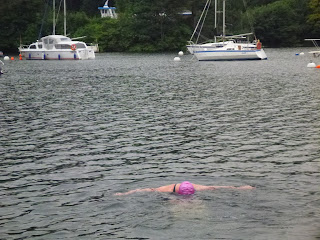 The first hour or so is never the favourite part of a swim for me - it takes me a while to settle down and find my rhythm and I'm always a bit nervous, wondering how the day is going to go. Unusually, I also had trouble with my goggles too, even though these were old-faithfuls that have never let in a single dribble in a good 100km of swimming use over the last few weeks. Consequently, there was quite a bit of stopping and fiddling, until eventually I stopped and asked Dave and Colin for a goggle change at the next feed....after which the original goggles immediately sealed perfectly and I was able to stick with them throughout.

Conditions were choppy for the first half of the swim, but I benefited from a stiff tail wind; we were also treated to some very moody-looking clouds and atmospheric light, especially later on in the swim as the lake opened up. 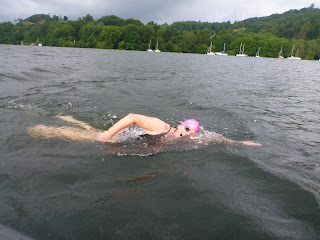 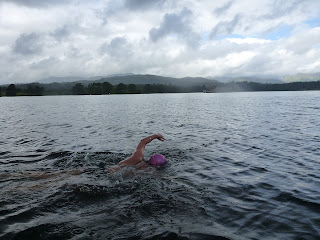 All was going very well until I realised about 3 or so hours in that the Thames wasn't done with me yet. I think that my insides were still quite delicate and the carb drink just put too much stress on an already precarious system, but whatever it was, I started to feel tangibly, dangerously sick. I told Colin and Dave at the next feed, not so much because I expected them to do anything, but rather because it only seemed polite to warn them, since I thought I was about to treat them to the lovely sight of me throwing up several hours' worth of purple drink. Clinging to whatever dignity I have left, I was faintly mortified by the prospect, but I comforted myself that it would be a change of scenery for them from the inexplicably extravagant strings of snot which I had been dribbling forth for hours. (This always happens to me in lakes but never the sea, and I have no idea why). This is truly not a sport for the self-conscious; sometimes you just have to let a body be a body.

On every long swim I've ever done, I've followed a basic feed routine of 400ml of drink hourly for the first 2-3 hours, then 300ml every half hour, supplemented with the occasional bit of banana or a couple of jelly babies. For this swim, because I was concerned about my lack of energy reserves, I fed 300ml every half hour from the start, with a back-up plan of moving to every 20 mins, supplementing one liquid feed for a gel each hour. Well, this all had to go out of the window, and for the last three feeds I alternated a gel only, then water, then a gel. This had a remarkably calming effect, and confirms what I've been thinking about for a while about moving towards using more gels instead of liquid feeds only - definitely easier on the stomach.

But even when I wasn't feeling 100%, I was still loving the swim. I am an extremely inattentive swimmer - it is simultaneously one of my greatest assets and flaws as a long distance swimmer. I rarely get bored in the water, and find it quite easy to just let my mind wander about, free associating against the steady rhythms of swimming; but at the same time, this means I'm not as attentive to my stroke as I perhaps could be, and I find it difficult to find the sustained focus that you need for a hard effort. It also means that while some small responsible bit of brain stays in charge of making sure I stay next to the boat or swim in the right direction, I do tend to lose awareness of my surroundings - anyone who has swum with me at Lake 32 will be familiar with the sound of me smacking into the dinghies tethered to the marker buoys. And so, as we passed through the islands around the middle of the swim, I was happily zoned out, but gradually became aware of a repetitive squeaking sound; my wandering mind pondered this briefly, and for some reason, settled on dolphins. I'd been thinking about swimming in California, so this sort of made sense in that context. It was a bit like looking at one of those pictures that has two images embedded in it - once you've seen one of the images, that 's all you can see. (This has happened to me before - it's a story for another day but I have often 'seen' galleons moored up outside the Premier Inn while swimming in Dover Harbour, and swimming round Jersey was convinced that a meteorological station was a large art installation made out of marshmallow - I don't believe it's hallucination, but more a kind of free associative thinking that just builds stories out of snatches of sensory information - a bit like we do in the state between sleep and waking). Anyway, once I'd made the (albeit ill-conceived) cognitive leap from squeak to dolphin, that's what it was. I was just coming round to a "Dolphins? In Windermere?" thought when I breathed to the right and saw Colin pointing exaggeratedly, blowing a whistle (squeak, squeak) and ....THUD. Straight into a buoy. Still, there are not many people who get to swim with dolphins in Windermere.

The rest of the swim just got better and better. The northern half of the lake opens up into spectacular views, and there's always something exciting about being right in the middle of a large open stretch of water, as opposed to close to the shore. We were also treated to a torrential downpour of rain - no fun for the crew, who turned up their collars resignedly and hunkered down in the back of the boat, but an untrammelled delight for me: 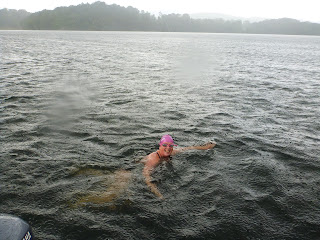 I love being in the water when it's raining - I could feel the percussion through the water of the big, fat drops hitting the surface, flattening it out, and the splashes made a thin line of mist just above the surface. Wonderful.

And then to the end, and a final finish time of 5.09 - considerably faster than the 5.30 I had been hoping for, so I was delighted with that. My shoulders also felt fine, and I certainly felt like I could have swum back, so that definitely bodes well for MIMS II. So....a fantastic day out on the water. 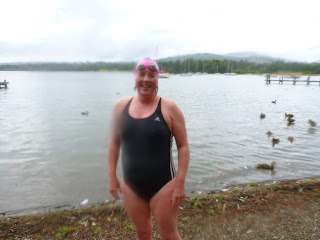 The team from Chillswim were superb - the logistics of end-to-end swimming take some working out, but it ran like clockwork, and even a small problem with the boat's ignition mid-swim was quickly resolved by a bit of creative hotwiring. 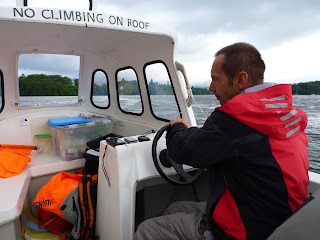 Dave and Colin were perfect crew - never climbing on the roof of the boat, while providing great navigation, and being constantly watchful but never asking how I was, even after I'd told them I felt sick. I know this sounds like a very perverse form of caring, but anyone who swims knows that there's nothing worse than someone constantly drawing your attention to a potential problem or weakness. I used to try and hide it if I felt ill, but now I think it's better to just tell the crew so that they can keep an eye on you and leave it at that. They adapted to the change of feed routine without blinking and endured the torrential rain (and my selfish pleasure in it) in good spirits. They also recorded the swim in considerable detail, providing me with a very useful record of splits, stroke rates etc afterwards, as well as a very pleasing GPS track: 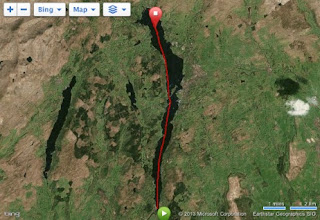 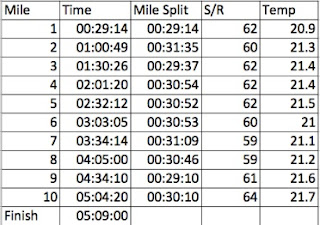 I was pleased with the splits and stroke counts - I'm not the most impressive, graceful or fastest of swimmers, but I'm nothing if not a steady ship, swimming fairly consistently throughout, and even when I wasn't feeling so great (I think around miles 7-8, when my stroke rate dropped a tad). This gives me a great deal of confidence for MIMS II, plus offers the tantalising challenge of working towards another attempt in the future to try and shave that 9 minutes off and sneak in in under 5 hours.

I heartily recommend Windermere as a swim location - it's beautiful, with the added bonus of being one of the iconic swims in the UK canon. The team at Chillswim have got a fantastic operation going up there and the whole event was safe, efficient and hugely enjoyable. You really get the feeling that they want to you get across and have a great day doing it. And I got exactly what I wanted too - a good training swim, a lovely day on the water, and a much-needed confidence boost going into MIMS II. Success.
Posted by Karen Throsby at 09:50