Some days are better than others...

Sometimes, it's just not your day. Unfortunately, I had to abandon my plans to go down to Dover this weekend for the Champion of Champions - when it's really windy, the van can only go at 45-50mph, making it a ridiculously long drive. Plus, I was stuck beneath a pile of marking that never shrank, so I decided to stay home instead and keep working. So...I went to Swan Pool this morning, hoping for a nice solid swim after a pretty intense and stress-filled week at work....En route, something in the van started flashing that shouldn't be flashing, and the temperature gauge was through the roof, but I made it there in one piece and decided to swim before sorting it out. So in I went, and felt fine at first, but then by the second 700m lap, I started to get REALLY cold. I tried swimming harder, but kept getting colder and colder - not in my hands and feet so much as in my core. By lap 4, I was getting the shivers in my torso, and I noticed on lap 5 that my stroke was really slowing down and decided to err on the side of caution and call it a day. After all the rain we've had, and the greyness of the day, it was definitely a bit on the chilly side, but I've swum much further in colder water than that, and it really did go straight to my core, rather than nibbling in from the peripheries, like it normally does. So, I don't know what was going on there....lack of acclimatisation resulting from my more inconsistent training this year? Sleep deficit? Stress? Hormones? Too distracted? 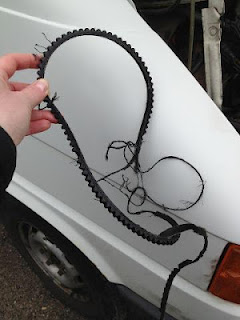 Then I had to sort out the van - Jeremy (who works with the safety team down at SP) had a look at it, thought at first that it just needed some water adding, but then reached in and pulled out this shredded belt from the engine innards. Now, I don't know much about cars, but even I knew that this probably wasn't good. But happily, this is why we pay all that money to the nice people at Direct Line, and they sent someone with a tow-truck to take me and my poor, debilitated van home.

So, both Bob the Campervan and I are clearly getting past our best.

Oh well...some days are just better than others. But to take a glass-half-full perspective on the morning, had I driven the 200+ miles to Dover this weekend, this would probably have happened on the motorway on the way home, which would have been an altogether different degree of not fun. Here's hoping for better next week.