Shut up and swim 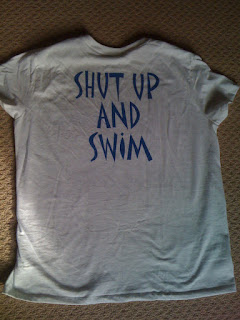 Peter bought me this great t-shirt for my birthday - I wanted one for those days when I can't face heading out the door for a workout. Maybe I should get some for my crew for my solo so they can turn round and flash this message at me if I start to get whiny....
But for now, still no swimming for me. I'm in the full grip of a nasty viral infection, and although it's starting to ease, I'm full of snuffles and coughs, and feel absolutely drained. It's all very frustrating, and I can't believe how much I'm missing the pool. Perhaps the rest will do me good. Anyway, hopefully I'll be back into it in a week or so.
Posted by Karen Throsby at 05:14 No comments:

Yuk. I managed to grind my way through one of Robin's brutal kick sessions last Tuesday morning, but by lunchtime I was feeling horrible, and by Thursday, I had no voice, a rattling cough and a thundering head. It's now Sunday, and I still sound like a dalek and feel completely drained. So, no swimming for me for now, which is all very dull.

Ho hum.
So for now, I'm trying not to get into a panic about the training I'm missing, and am following the excellent example of Oscar, for whom resting and not getting worked up is an art form ... 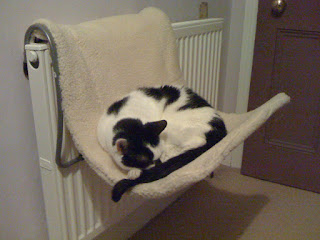 Posted by Karen Throsby at 06:21 No comments:

As I mentioned last month, my mum's been fishing out some old photos, and she found some of my grandfather, Harry Cornforth. He was a seriously good swimmer and water polo player who missed out on the chance to compete for a place in the Olympics because he couldn't get a paid leave of absence from his job on the railways to train with the squad, and couldn't afford to do it without pay. What an opportunity missed. We found this picture of him with his local water polo team - we think it must be from the mid-late 1930's. Harry is the one on the right in the back row. You've just got to love those fantastic knitted body suits. 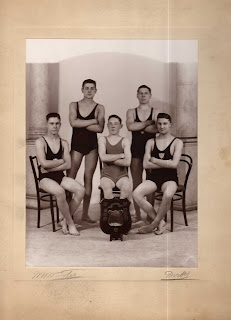 He did a lot of what we would now call wild swimming when he was a boy, and he also taught me to swim. He died a few years ago, but he would have absolutely loved all of this Channel swimming.
Posted by Karen Throsby at 08:54 No comments:

It has been a week of hugely mixed emotions.

This Monday, we said goodbye to Peter's mum, Dianne, who died over Christmas. She was a wonderful woman, and a good friend, and we miss her terribly.

After the strains of the last couple of weeks since her death, Peter and I started to settle back into our work routines. I'm still on research leave (for the rest of this academic year), but dropped in to the office to pick up my post and found a letter from the Economic and Social Research Council (ESRC - the UK government funding organisation for the social sciences) saying that I've been awarded the grant I'd applied for to do the Channel swimming research!! I just can't believe it - it means that I have the funds to do the project properly, including training camps, Dover, lots of interviewing, plus a trip to California to train with, and interview, swimmers there. Plus, there's some money to buy me out from a bit of teaching, which should free up some time each week to keep working on it outside of the training season. I'm so excited.

So, a week of sadness, and excitement; endings and beginnings.

Swimming has ended up taking a back seat this week - firstly, because of the funeral, and then I went to a fantastic seminar in Durham on Thursday / Friday on "Fat Studies and Health at Every Size". It's part of a series of seminars that I've been (peripherally) involved in organising and the next one is here in Coventry - get in touch if you'd like to come. It's a great chance to think more critically about the "obesity epidemic" and what the so-called "war on obesity" means for those whose bodies fall outside of what is considered to be "normal" in size - something that might be of interest to Channel swimmers, many of whom have learned to value body fat rather than hate it. It was a wonderful couple of days - lots to think about. And with luck, it will help stimulate me in the painfully slow process of writing my book on obesity surgery - I've been a bit stuck with it of late, so am hoping for some inspiration soon.
Posted by Karen Throsby at 08:13 No comments: