After much thought, I've decided to retire The Long Swim, although hopefully only temporarily. It's not been the easiest decision as I'm quite attached to my little blog, but life has got a little bit crazy of late and something has to go - at least for a few months. I didn't want to just not post, so I'm officially stepping away for a bit to concentrate on work; with a bit of luck, I'll be back in the new year to start blogging in the run-up to what promises to be an exciting summer of swimming.

Thanks to everyone who's been reading and commenting on the blog. I'm looking forward to reconnecting in a little while.

And in the mean time, happy swimming.
Karen
Posted by Karen Throsby at 13:39 No comments:

So the end of the grant is approaching, and I've been working on putting together an end-of-project magazine showcasing the key findings of the research. This has been something of an adventure for me. Firstly, I had to learn how to use desktop publishing, which in itself isn't so hard, but took a while to get the hang of. And then secondly, I had to come to terms with my own complete lack of skills in the design department. This is a much harder problem to deal with, but fortunately, I was able to run various drafts by smart individuals who know a thing or two about this stuff, and they gave me a crash course in consistency and simplicity. Then thirdly, I had to reign in my inner windbag, and try to get the text down to short,  to-the-point chunks of text where the important points didn't get buried in my tendency to 'sociologise'.

As a result, the process of making the magazine turned in to a bit of a performance, since I had completely underestimated just how compulsive it is. The possibilities for fiddling with margins, borders, fonts and pictures are endless; I think I have found the perfect displacement activity.

But....it's finally ready on online, and to be honest, I think it's rather attractive and am quite chuffed with it. You can download a copy from the publications pages of my research website - just click on the picture below to get to the site: 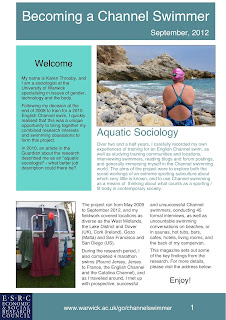 Now that the grant is almost over, I'm trying to focus my attentions on writing the book from the research. I am using the working title of "Immersion", and it's still embryonic, but hopefully I'll be able to keep chipping away at it as the year progresses. And, of course, I'm back to training now - it just wouldn't be right to write a book about Channel swimming without it.

It's hard to believe that my ESRC grant for the Channel swimming project has only two weeks left to run. For two and a half years, I swum, travelled, supported, chatted and generally ambled about the swimming world learning about what it means, and what it involves, to become a Channel swimmer - socially, culturally, bodily. It really has been an enormous amount of fun, plus I'm hoping to see some publications and other outputs coming out over the next year. I've even made a tentative start on the book - at the moment, I'm toying with calling it "The Long Swim" after the blog, but I'm not sure. All ideas welcome.

Anyway...the final flurry of the project was an end-of-project one-day seminar on Endurance Sport. There are more details about the programme for the day on the project website, and much more will be going up there over the next week - videos of the presentations, and some great drawings from the day, courtesy of 'drawnalist' Matt Buck, who was there documenting the talks in real time in drawings...including leading everyone in through the maze of construction around Warwick Library with these fabulous signs.

I gave a paper on the sensory pleasures of marathon swimming - this is my attempt to try to move the focus away from narratives of toughness, suffering and overcoming that tend to dominate, and to think about the other reasons why people engage with the sport; I wanted to think about the pleasures of swimming that make people want to do it for its own sake, rather than only for the pleasures of completing a swim. The video of the talk will go up on the website, but for now, here's the drawing that Matt did of talk, showing the key themes... 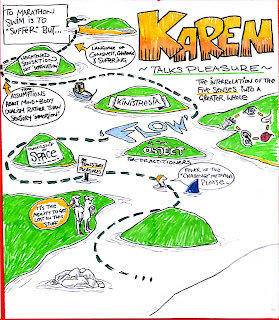 When I first decided to train for a Channel swim, I imagined it as a one-off, goal-oriented challenge - I would train, swim, and hopefully make it to France. And that would be that. From the perspective of the research, I had imagined the process of "becoming a Channel swimmer" very much in this light, at the beginning at least - a linear narrative of transformation from someone who couldn't swim the Channel into someone who (maybe) could. Recently, I've been writing the first drafts of a book proposal on the Channel swimming research, and have decided that it's going to be about the different kinds of 'becoming' that happen during the training / swimming process - bodily, sensory, social, cultural etc. But in the drafting process, I've realised more and more that the linear narrative doesn't really work. In strictly documentary terms, I became a Channel swimming on September 2, 2010, and from that perspective, I will always be a Channel swimmer. It's there on the wall of the White Horse for all to see. But over the last year in particular while I've not been swimming so much, in terms of my swimming capacity, I have become less and less of a Channel swimmer as time has gone on. I could not swim the Channel today. So I both am, and am not, a Channel swimmer right now.

From a research perspective, this helps me to think about the different processes involved in becoming a Channel swimmer - some of which are things that we make happen through training (stronger muscles, better technique, learning to take the right foods); some are things that our bodies do, sometimes in spite of our training, that can facilitate or inhibit that process (needing more sleep, illness, ageing); and some are things that 'society' does, such as awarding status to certain displays of physical endurance. More about this as I develop the book proposal.

And speaking of non-linear processes...today's the day that I have committed to my swimming venture: a second solo swim in July 2013. Perhaps a circular metaphor would be more apt; I feel like I'm going back to the beginning again after my lazy year. But of course, you never go right back to the beginning, not least because this time I have the advantage of having acquired lots of techniques of training and swimming that I didn't have before. Hopefully, I will make fewer mistakes, and have far greater resources to draw on in my training than before (although that's not to say that there's not much more I still can learn). Why do another one? It's partly curiousity; I just want to see what it's like on a different day. But it's also the desire for the structure and drive of training; without a goal, I tend to dribble along a bit too vaguely. And I love the swimming; and especially, I love the LONG swimming. And I'm lucky enough to have the resources and (hopefully) the physical capacity to do something that I love. So why not!

Happy anniversary to me (and my crew, Peter and Sam). Fingers crossed for a happy second time around.
Posted by Karen Throsby at 09:32 No comments: