The pool saga rumbles on, but happily, much more fun things have been happening and  earlier this week I was lucky enough to be accepted onto the 8 Bridges swim. I haven't been sure whether or not to sign up for something so ambitious and I was originally hoping to wait until February to decide once I'd got back to training, but it started to fill up within days of the registration opening, so there was nothing for it but to jump in with both feet. Billed as the world's longest marathon swim, it's a 120 mile 7-stage swim down the Hudson River, starting in the Catskills and finishing at New York harbour's Verrazano Narrows. I'm one of 6 swimmers attempting all 7 stages, along with lots of others doing smaller combinations of stages, so it promises to be a hugely fun and exciting week.

I've had my eye on the 8 Bridges for a couple of years now. Everyone I know who's been on it can't speak highly enough about the swims, the atmosphere and the superb organisation, courtesy of Dave Barra and Rondi Davies - both extraordinary swimmers in their own right. And then there's the leaping. Every year, the swim's Facebook and blog pages fill up with joyous pics of swimmers leaping , hurling themselves off boats with the kind of abandon that you only find among people who love the water. I'm not at all sure that my exuberant leaping skills are anything like up to this standard, but I'm willing to give it a go.

But I'm also drawn to the relentlessness of the challenge; while I've always enjoyed the idea (and reality) of a singular 'big' swim, I love the idea of getting up day after day and doing it all over again. And it's an intriguing training challenge as well as rather intimidating prospect. To be absolutely frank, even with good conditions, favourable winds and all the good luck upon which marathon swimming relies, I'm not convinced that I have all 8 bridges in me. At best, it's at the very edges of my capacities as a swimmer, and if I complete them all, I will have been very lucky indeed. But it's good to try something difficult; if I learned nothing else in 2013 it's that swim failure isn't a disaster, and this time, if I have a bad day and things don't go well, there'll be a chance to muster my resources, recoup and get back out there for more the next day.

So there's heaps of work to be done, and me and the big blue clock have been working hard at getting my fitness back up to the point where I can train consistently and productively. At the moment, I'm doing just an hour a day in the EP mixing up technique work, threshold sessions and longer, steady sets to build endurance, but will start inching that upwards as my fitness returns. If nothing else, you have to love the irony of training for my longest swim to date by going absolutely nowhere for hours. I don't know yet what the limits of the EP are in terms of training and at what point (if any) you simply have to get into a full length pool, but the foreseeable future, the logistics of work and commuting plus the privilege of having the pool, mean that this is an entirely EP-based training programme for now.

If you need me, I'll be in the shed, swimming, and thinking about bridges....all 8 of them.
Posted by Karen Throsby at 12:46 No comments:

We've had the pool for a few months now, and it's been something of a mixed bag. On the plus side, when it's all working properly, it's brilliant. It's amazing to be able to just pop down the garden to swim without having to deal with pool hours and unpredictably crowded lanes. And aside from the convenience of it all, my feeling is that it's a very productive training experience. Unlike in a regular swimming pool, 'distance' is a pretty useless metric when you're swimming on the spot, but instead, you have 'pace' plus 'time'. Unlike in a regular pool, you know immediately when your pace is slowing because you start to drift backwards, so it's a fantastic way to acquire an embodied sense of the different pace registers of swimming and to learn to hold those paces consistently. 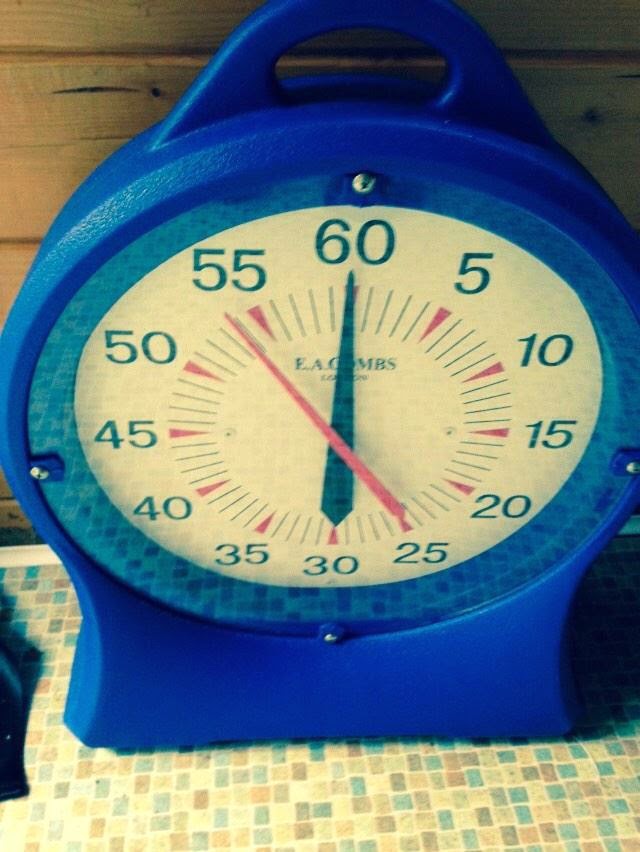 Combined with the big blue clock, the predictable pacing of the pool can be structured around time intervals - for example, into ladder or pyramid sessions. If you build in a 10 sec rest between intervals, you have just enough time to switch the pace up or down a notch before starting again. I don't know how well the pace per minute readings on the pace clock correlate to actual open water swimming, but this doesn't really matter; the pace meter only needs to be internally consistent. I also combine these sessions with longer sets of steady swimming, usually in half hour chunks, after which the motor switches itself off. The lack of turns and glides at the pool ends means that it's a pretty consistent workout, and I find it very soothing and meditative to be in there with no distractions. So far, so delighted.

But sadly, the pool also sprang another leak a few weeks ago - this time on the wall of the liner and without any prior injury or knock. This is the third leak in three months, and unlike the other two which were slow dribbles, this one was quickly unmanageable, and within 2 hours, we'd used all of our towels and we were desperately mopping and stuffing duvets and sleeping bags around the edge to try and control the flow while we frantically tumble dried the towels. After a few hours, we gave up and emptied the pool using a sump pump we had bought after the last leak. I'm just grateful that we were there when it happened because it would have caused an enormous amount of expensive damage if left unchecked.

The pool company came to repair the leak a few days later, but after three leaks in three months, we no longer consider the integrity of the liner to be intact and want to have it replaced. We're nervous even to go away in case it goes again. Unfortunately, the pool company refuse to consider paying for a new liner, even though they offered us a 1 year guarantee for parts when we bought the second hand pool off them. We know that the liner was kept in storage in ways that are directly in contravention of Endless Pool's guidelines (it should be stored clean and dry, while ours arrived from storage dirty and with puddles of water sloshing about), although the pool company insist that this could not have damaged it. In a way, it doesn't really matter what's caused it; the fact is, as far as we're concerned, it's no longer viable. Endless Pool sold us a new one at a discounted rate, but the pool company are now refusing to even quote for the cost of dismantling the pool, replacing the liner and reinstating it. Because regional agent companies have a monopoly over a given area, we are not allowed to simply go to another EP agent company, and I'm now planning to petition Endless Pools to hopefully find a way around this impasse. It's all very frustrating and disappointing.

So this is where we are at the moment. The new liner won't arrive until around Christmas time, so the replacement work won't be possible until the new year. So for now, we've bought a repair kit just in case, and are keeping the pump to hand in. It remains to be seen who ends up doing the work; all I know is that it's going to cost us a lot of money.

So what have I learned so far? Having a pool is a fabulous, unimaginable luxury that is a dream for training. On this front, I have no regrets at all and it is an enormous privilege to be able to have one. But if I were to do this over again, and with all the benefit of hindsight, I would (a) buy a new liner from the outset; and (b) listen more carefully to the warning signs that were there in my early interactions with the local agent company and not allow myself to become such a hostage to fortune. I'm sure it will all be resolved eventually... hopefully before the next leak springs.

And in the mean time, me and the big blue clock will keep working away. And more importantly, I'm hoping I'll have an announcement soon about plans for next year.
Posted by Karen Throsby at 09:26 No comments: