Things were going so well...It's been a struggle since January to get the hours in the pool that I need, but I've managed to keep going, finally hitting the open water in May and building to several 6 hours swims, including a couple of back-to-back sessions. Each time, I was tired, but left the water feeling good and without any aches or pains. I was feeling optimistic, and began my taper for my planned Windermere weekend (2-way, followed by a 1-way) when out of nowhere, three days before the Windermere swims, and during a very gentle hour in the pool, I got a slight niggle in my left elbow. It was nothing major, but it was new. The joint felt a bit stiff afterwards, but the next day it seemed okay, so in I went again, just for a gentle paddle, but back it came, more insistently this time. Damn.

I booked an emergency sports massage appointment, and later that day, the wonderful, relentless Christine massaged my left arm to within an inch of its life. Already, I could feel that a lot of the tightness that had caused the problem had gone, but sadly, it was too late to risk doing the Windermere swims and reluctantly decided to cancel. I felt terrible, especially since Mark Robson and Amanda Bell had generously set aside the time to crew for me, but given the residual post-massage soreness that lasted several days, I'm convinced that this was the right decision and that this will give me the best chance of getting to Geneva in one piece. But one of the undesirable consequences of inserting a long swim into the training cycle as a confidence-builder is that when that swim can't happen because of injury, it's a bit of a confidence-crusher and I am feeling full of self-doubt.

So now, I'm awash with indecision. The elbow is heaps better, but not quite 100% (yet?), but unfortunately time is not on my side and I can't wait around indefinitely to decide for all kinds of logistical and financial reasons. So I have to choose very soon whether to just commit, give it a bit more recovery time and then go for it, or to err on the side of caution and postpone until next year. There are many reasons why I don't want to pick the latter option - I've really had to work hard to get the training in this year, and I'm not sure I'm going to be able to repeat this next year, particularly since I have an even heavier workload in front of me; but also, after putting in all that work, I don't want to waste it. But then again....after all this time and money, I don't want to go into the swim without having done everything possible to succeed. With 7 weeks to go, and having already had time out to taper for the Windermere swims and then recover from the injury, there's not a lot of slack left in the training schedule. AAARGH. I just don't know.

Ultimately, I'm hoping that my elbow will make the choice for me, so I'm off to the Lakes this weekend to do a couple of long swims. If it feels okay, then I'll commit to going for it; if it doesn't, then I'll have to pull the plug for now and try to come back next year.

It's not how I hoped all this would go, but it's an occupational hazard for a sport like this, so I can only hope that the right decision becomes clear over the next few days.

And in the mean time, make sure you're following the 2016 8 Bridges swim, this year with the added ability to track the swimmers  (courtesy of Evan Morrison's new tracker app) as they progress down the river each day. You might as well give up on doing any work now and settle down to watch - it's easier that way.
Posted by Karen Throsby at 07:00 2 comments:

It's finally here...the real life, hold-it-in-your-hand book. After all these years of work, and over a year since completing the manuscript, it scarcely seems true. But it is....there's a happy heap of copies on my office floor (although I haven't dared open any of them up yet in case I find typos!). It is 14 years since my last monograph, so this is probably slightly overdue, but still...I couldn't be more pleased. Plus at 48, who ever thought I would find myself on the cover of a book in a swimming costume, with my back smeared all over with a US nappy rash cream called "Butt Paste". Life is strange and wonderful. 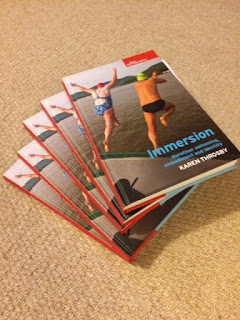 I'm not going to be flogging the book mercilessly either on or offline, not least because it's a relatively expensive hardback which is aimed primarily at libraries at this stage (with a paperback to follow next year). But, please allow me this brief promotional post....

If you wish to buy a copy, you can purchase it from Manchester University Press. They are currently having a summer sale with 50% off all books, so the usual purchase price for my book of £70 is currently reduced to £35. (Still expensive I know, but better). To get the discount, click the "buy now" button and enter the discount code Summer16 in the 'promotion code' box. Unfortunately, the code only applies to UK / EU purchases at the current time (the US sales are being handled by Oxford University Press).

I'm very excited for the book to finally be making its way into the world, and of course, I am very grateful to everyone who helped with the research. Books, like marathon swims, are a team effort, even though only one name ends up on the cover. So big thanks all round.

A warning….this post is not about swimming (although, as with most things, I came to it via swimming, where discussions about diet and nutrition are rife). As I explained when I re-launched the blog in February, as my research moves away from swimming, I want to start using this as a site for testing out new thoughts and ideas about a range of projects and issues, some of which are more obviously swimming-related than others. So if you’ve come to the blog looking for swimming posts, please browse away through past posts….or come back in a couple of weeks, by which time I’m sure more swimming will have appeared.

With my swimming book now at the printers (and out in August), I’ve been working on getting some new writing and research projects going. My primary goal is a long-abandoned but recently resurrected book about obesity surgery, but as a side project, I’ve been getting very interested in radical weight loss diets – those diets which conform to contemporary anti-obesity sentiment, but which stand in direct opposition to mainstream dietary advice. I started off by focusing on low carb – high fat diets (LCHF)  (e.g. the Real Meal Revolution) which have become very popular in the swimming community recently, and then extended this to plant-based weight loss plans (e.g. Forks Over Knives). The former rely heavily on animal products as a means of limiting carbs and increasing the consumption of fat, while the latter completely reject all animal products (including dairy). In spite of this very fundamental difference, I’ve been intrigued by how much they have in common, leading me to ask how the cases for each are made, what values they appeal to, and where their similarities and differences lie.

I need a couple of quick caveats here: as a recently converted vegan, and a vegetarian for 30 years before that, I have an obvious loyalty to plant-based eating and think that it is environmentally and ethically irresponsible to promote the greater consumption of animal products.  But this is not what this project is about, and I think that while the vegan critique of LCHF is personally important to me it is not particularly interesting sociologically. For this reason, I have excluded books guided by ethical veganism and am focusing specifically on plant-based weight loss plans. Nor is the project about adjudicating the health effects of one or other regimen, but rather, to think about how those claims to weight and health outcomes are made and to what social effects. There is one final caveat – and one which anyone familiar with my writing on marathon swimming and fat will recognise. I come from an academic tradition of feminist Fat Studies and as such, approach this topic with a well-worn suspicion of the easy equation of fatness and ill-health, and a resistance to the habitual and moralising assumptions about fatness that run through the contemporary attack on obesity - a starting point that not everyone will agree with.

In dietary terms there is more common ground between the two dietary styles than you might expect, particularly in relation to the rejection of processed and refined foods, and both regimens have armies of acolytes for whom the prescribed dietary transformation has produced effects on the body that are experienced as both positive and meaningful (and I think it's important to take those experiences seriously). But the most interesting common ground for me lies in the programmes' self-presentations and justifications, many of which overlap strongly with mainstream anti-obesity interventions. Both share the caricatured and hysterical fear-mongering that is the hallmark of the ‘war on obesity', and both are sites of weight loss entrepreneurship, selling books and other products and plans, as well as engaging in research. Both marshall ‘science’ to shore up their arguments, as embodied in books and websites primarily through the figures of white, male doctors and scientists. Both exercise a rigorous critique of opposing scientific views but rarely extend that level of scrutiny to supporting studies or to the obesity science literature which feeds the ‘war on obesity’ more generally. ‘Science’, then, for both is usually good or bad, but rarely treated as inherently uncertain. Both rely on highly strategic and partial evolutionary accounts of what we are 'meant' to eat. Both caricature and generalise the diet of the ‘irresponsible poor’ whilst offering solutions which demand the social, cultural and economic capital of the (westernised) middle classes. Both treat weight loss as synonymous with, and a proxy for, health in ways that are fundamentally unreliable. And both rely on profoundly masculinised narratives of bodily mastery and athleticism as proof of positive health outcomes.

My preliminary argument, then, is that while both LCHF and plant-based programmes identify strongly with their dissenting roles in relation to conventional dietary advice, they simultaneously reproduce many of the normative assumptions that underpin mainstream anti-obesity campaigns and which Fat Studies scholars have been critiquing for years.

In short, I don’t think that they’re as radical as they appear to be at first glance, and can alternatively be seen as intensifications of existing ideologies rather than divergences from them.

And this leads me to a further question (and one which is central to my obesity surgery book), which applies to both the general audience and to the feminist and Fat Studies communities for whom the failure of diets is a core element of their opposition: What if it works?  If one or other (or both) of these regimens were to be successful in safely producing sustained weight loss and improved ‘health’ (however that’s measured), what does that mean for the fat body? What new or intensified coercions might result? What gets overlooked in the relentless focus on obesity as the motivating problem to be solved?

These are only my preliminary thoughts, and I’ve got heaps more work to do. But even if it doesn’t come to anything, at least it’s the kind of research where you pick up some great recipes and food ideas along the way (chocolate-banana ice-cream, anyone?).
Posted by Karen Throsby at 04:52 2 comments: