I spent a large part of last week swimming in the best part of 100 circles - an occupational hazard for those of us who don't live anywhere near the sea and are bound to c.7-800m lake-loops. It was my last chance to get some distance in before tapering for MIMS, and it happily coincided with a week of no teaching but mountains of marking. So, I upped sticks and relocated myself in the camper van to the Go-By-Cycle campsite near Lake 32 in Cirencester. Open until 10am every morning as well as for two evenings a week, the lake was my best chance for some decent open water training given the more restricted opening hours of my local lakes. The only obstacle was the ongoing problem with the cold weather, with air temps falling to 2-3 degrees in the mornings, accompanied by biting winds and various outbursts of slewing rain, hail and general unpleasantness. To say that it was a hard week is an understatement, and there was a great deal of this:

The water barely inched above 12 degrees for the entire week, and it was all a bit of a slog, but I managed to stick to a routine of 2-hour swims, with one 3-hour swim on a slightly milder day. I also managed to get a couple of double-dip days to crank up the mileage a bit. And in between, I ploughed through the boxes of marking, either in the van, or on colder days, in a nearby cafe, bundled up post-swim and mainlining hot coffee.

With 50km clocked and all of my marking finally finished, I headed back to Coventry ready for the training week's finale - a 6 hour swim test at Swan Pool in Walsall, courtesy of the Sandwell Channel Swimming and Lifesaving Society and the Birmingham Lifeguards, organised by Dan Earthquake. I've done at least one of these events most years, and the weather has been reliably vile for most of them, so given the chilly week I'd already had, I have to say I wasn't really looking forward to it - especially since the water has been holding at 12 degrees for several weeks and I didn't think I had 6 hours in me at that temp. But just when you think you've been pushed about as far as you can be pushed, open water swimming steps up and offers you a treat. And so it was - a day of glorious, uninterrupted sunshine. Bliss. And so I swam in endless circles, with purpose, the sun on my back and in calm, windless water. 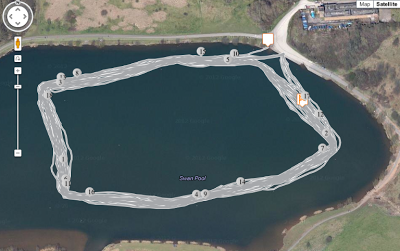 My Hydrotracker ran out of beans about 30 mins before I finished, but I ended up covering about 20km and beating my previous record for a Swan Pool 6 by 2 laps. A good result.

I've done these events pretty much every year since I got into marathon swimming, and they're low key, but with great safety cover and boundless encouragement, whatever the individual's goal. We had a great support crew on shore who basked in the sunshine, counted laps, offered support and helped with feeds - thanks so much everyone. 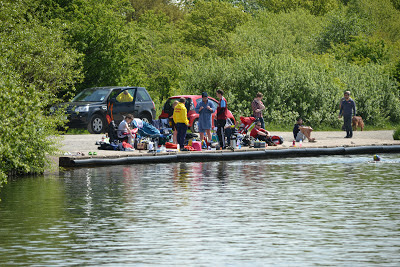 Even the geese have finally plucked up the courage to reproduce, in spite of the cold: 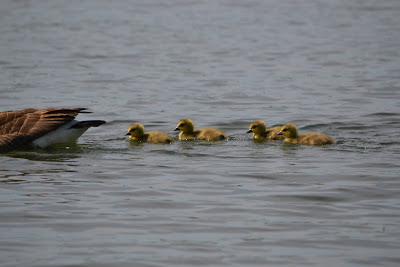 We all fed off the pontoon - I settled in to my usual routine of carb drink (SiS Go...what used to be PSP22, flavoured with blackcurrant squash) with the occasional banana or jelly baby. 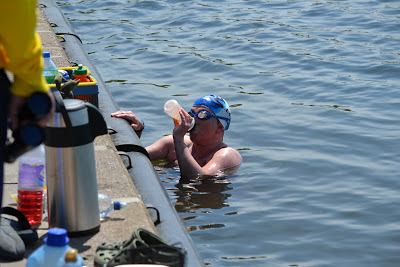 I don't know what was going on here, but I look pretty desperate for that carb drink.... 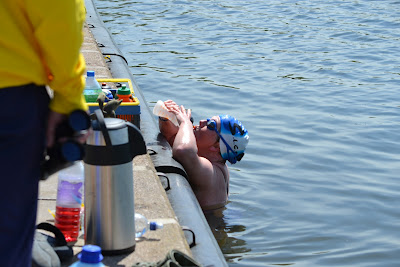 And as the day passed slowly by, I carried on swimming in circles, going nowhere, with purpose.... 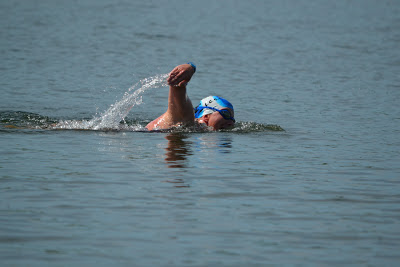 The lake started at 12 degrees and continued to hover around there for the first few hours, made more bearable by the warm air temps and bright sunshine. But it's a relatively shallow lake, and by 4pm, it was close to 15 degrees. Now that's more like it.

So, a 70km week of OW swimming, topped off with a real treat of a sunny day and a good, confidence-building 6 hours.

But pleased though I was with my week of swimming, special mention has to go to Dan, who entered the water at the crack of dawn and completed a 10 hour swim that day. Amazing, especially when you consider that he also did a 6 hour swim in the sea (at 9 degrees!) the previous week. Dan has an early Channel swim booked and the prize is surely his for the taking. 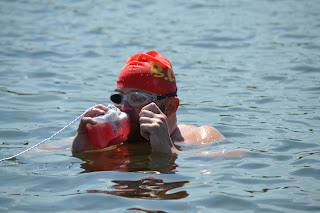 Many thanks to the lifeguards and supporters who took care of us, to Dan for organising the day, and to Lee Warr for the lovely photos. You can find more of the pics, plus Dan's record of the day, on the Cold Water Culture website. 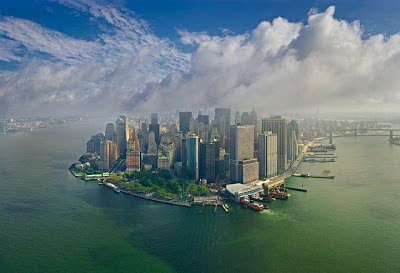 I have been spending an awful lot of my time recently looking like this: 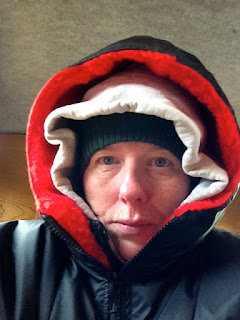 I've moved most of my training outdoors, partly out of sheer relief to escape the pool, but also because I need the OW training in preparation for my upcoming swims. But good lord, it's cold. Week after week, this is all we get: 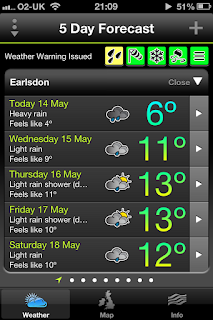 Over the weekend, I camped in the van at the Cotswolds Water Park, and was woken in the night by a massive hail storm. Hail. In mid-May.

So, in short, even though a couple of weeks ago I was talking about my need to face up to the cold and not let the Mallorca fiasco get on top of me, I'm now officially over it. The water is about 11-12 degrees in all of the lakes I swim in, with air temps often close to 3-4 degrees for early morning swims, and generous helpings of driving rain and biting winds to add to the fun. Two hour training swims are a slog of numbed endurance, and I'm still wandering around wearing everything I own several hours after each swim. I'm trying not to whinge, I really am, but I feel that we've done our time in the cold and are ready to be rewarded with a couple of extra degrees, just by way of encouragement.

But in the face of the horrid spring weather this year, and the ever-present shadow / excitement of MIMS, I can't stop, and I can't bring myself to return to the pool. So instead, I bought a Dryrobe. The towelling Robie Robe has been around for ages, and is a welcome protection from the wind pre- and post-swim....as well as against accidentally flashing body parts at strangers whilst changing on a windy beach. But the Dryrobe - a relative newcomer to the market - is a different beast entirely: 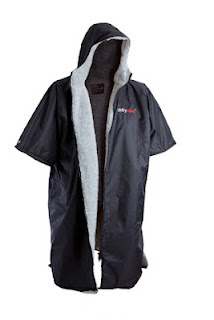 It is warm, snuggly and windproof, and you can put it on straight after swimming as you scurry off to change, or on top of your other layers of clothing post-swim for extra warmth. It's big and roomy with a two-way zip, so you can easily get changed inside it; the longer sleeves are an improvement over the Robie's side slits, which offer limited modesty for women when changing. It's not cheap (£72.99 for the standard version and £89.99 for the advanced version (it has pockets, which in retrospect, would have been handy)), but right now, I wouldn't give it up for anything.

It's well-made, and for £5, you can get your name embroidered on the sleeve, which is a nice touch. But it's also worth noting that this is not a high fashion item. Walking to the van last Saturday, with the Dryrobe over my wet swimming costume and with lime green crocs poking out from underneath, it was hard not to notice the gales of laughter coming from my triathlon club friends. The 'look' is complemented for those of us who are not particularly tall by being 'one size fits all' - ie, massive. I looked, as one pointed out, like a child playing dress-up in my mum's dressing gown. Like so many things in marathon swimming, it only makes sense as an item of clothing when you're around other marathon swimmers; otherwise, you just look a bit strange. But also like so many things in marathon swimming, it's all about function rather than form. And as a functional item, it is unparalleled; the bee's knees of post-swim clothing.

I have only two reservations about it. Firstly, as with the Robie, it is physically impossible to get a tank-top style sports bra on under the cover of one of these things. I tried to do so on one occasion post-swim and got so tangled up that I thought I was going to have to call one of the emergency services to free me. Perhaps it's just me, but it's just not possible. It's an unfair criticism of the Dryrobe, really, but still... I defy anyone to be able to do this safely.

And secondly, while there is an excellent website for marketing the Dryrobe, it contains a couple of inexplicably sexist and patronising images of a very slim woman in a stripy bikini with long (dry) blonde hair, and in one case, of her peeling the Dryrobe off one shoulder to reveal a scantily clad breast, while she looks doe-eyed at the camera. I've seen many women wearing the Dryrobe, and I can assure you they all look scarlet, dishevelled, tense with cold and vaguely like they've been sleeping outside behind the bins for a few nights. I cannot think of a less 'come hither' item of clothing in appearance or practice. It's ridiculous, sexist nonsense of the kind that drives me crazy (and if you want to see the picture, I'm not posting it here, so you'll have to find it yourself).