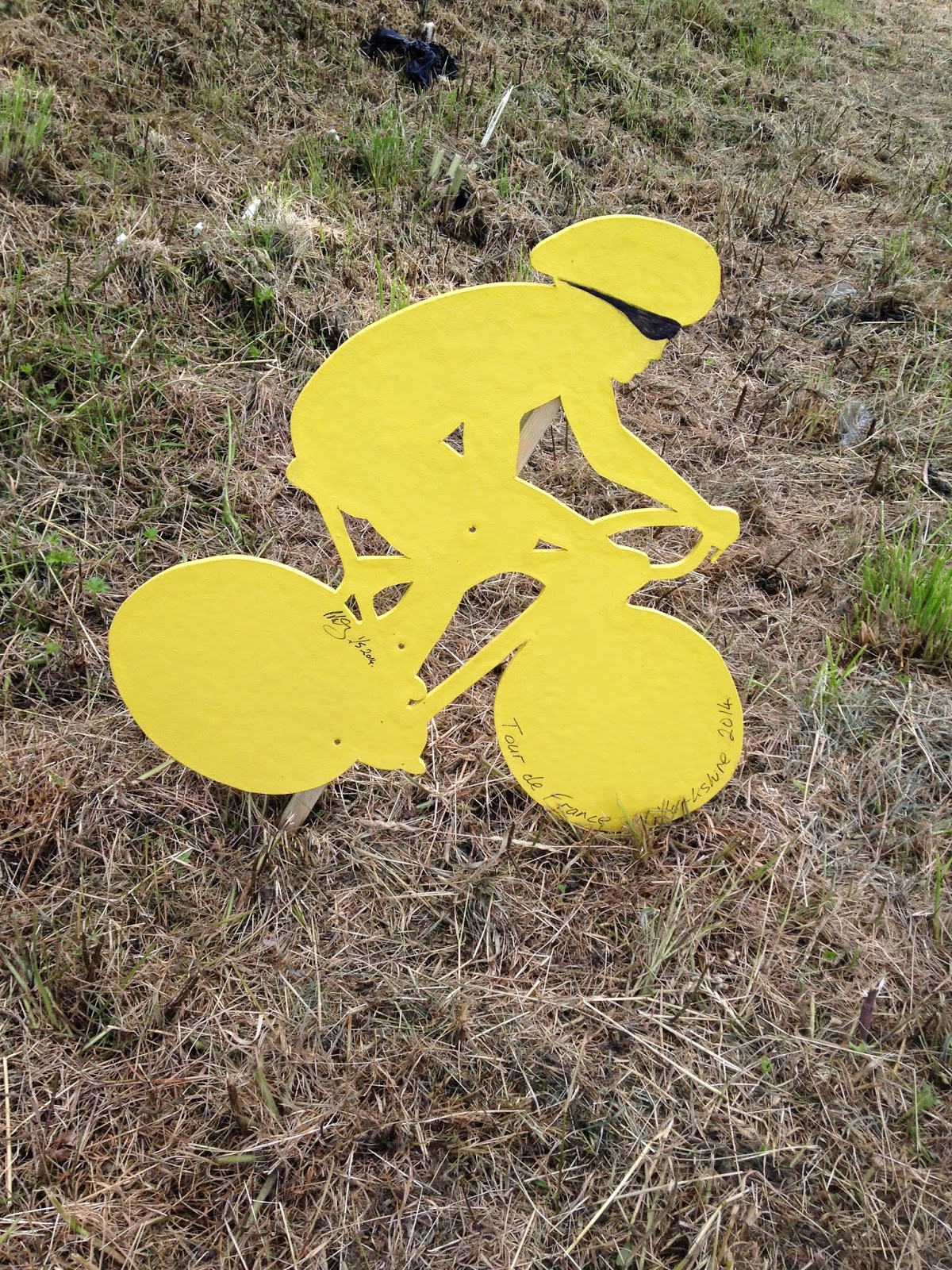 If we weren't sure about our decision to move to Yorkshire before this weekend, then we are certainly sure now. This weekend, the Grand Depart of the Tour de France came to Yorkshire, with the riders sweeping within easy striking distance of our new house on both days. I've always had a soft spot for the Tour, and we always follow it on TV every year, in spite of the twin stains on the event of the continued absence of a women's Tour, and the sport's well-established history of cheating. But to say that Yorkshire was excited about the Tour would be something of an understatement and I have never seen an event so widely and wholeheartedly embraced by an entire region, which by race-weekend was festooned with yellow bikes, bunting and chalked messages. 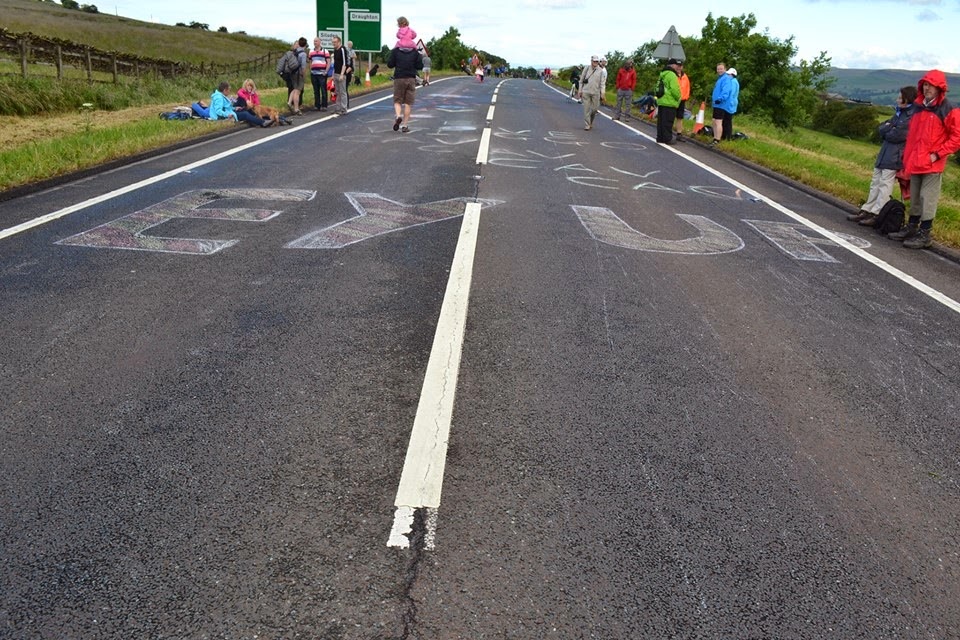 Already impossibly excited at the prospect of seeing the Tour go by, the weekend was made even more special by the arrival of our lovely Californian friends, Scott, Debbie and Quinn, and by Friday evening, we had our plan of action drawn up and ready to go. 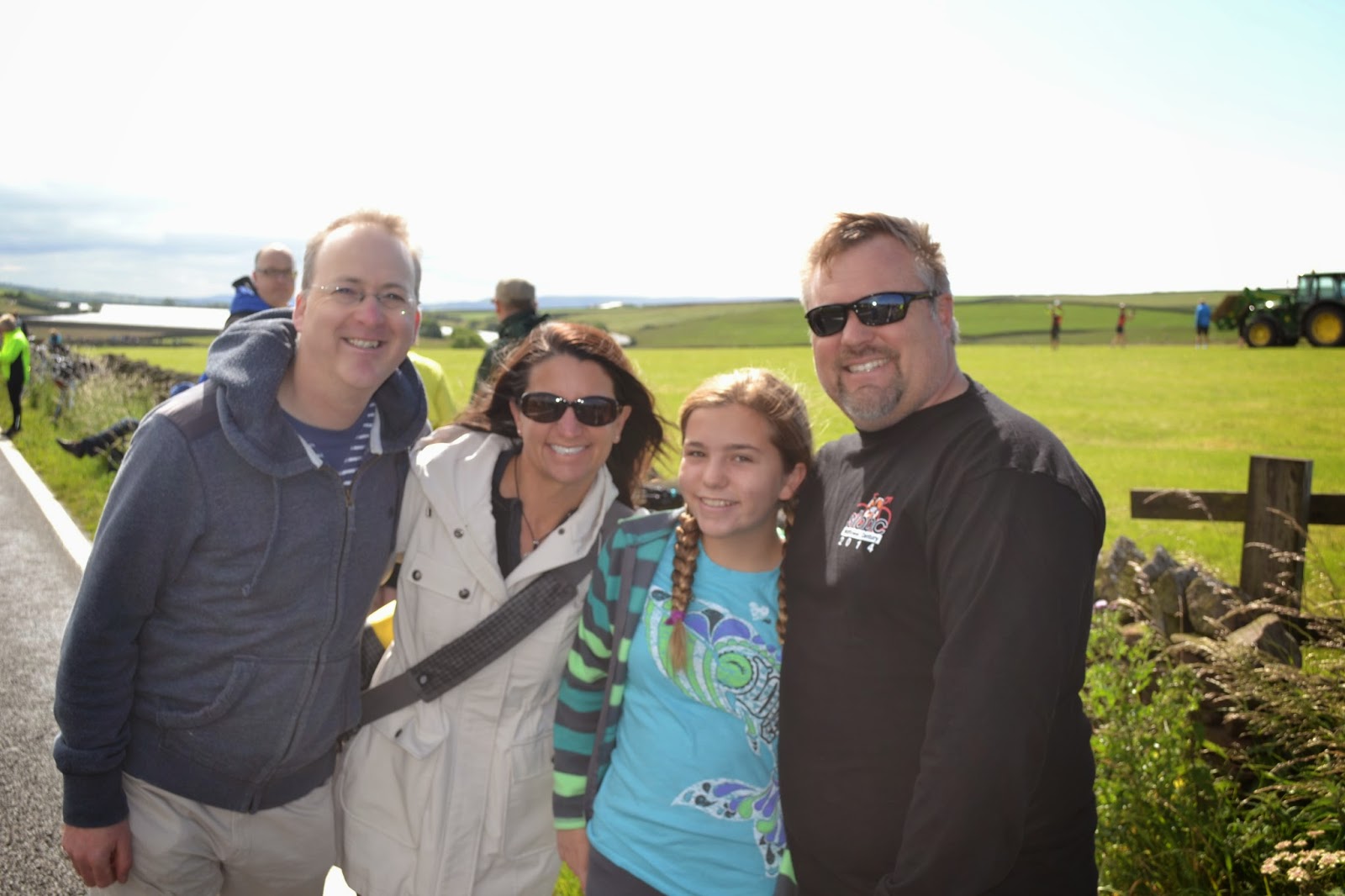 On Saturday, the Tour passed along the A65, just a five minute walk from the house, so we installed ourselves on the roadside with a clear view down the hill, as well as of a couple of approaching bends in the further distance. The caravan came through first, followed by dribbles of team cars, sponsor vehicles and UK and French police. Excitement mounted as helicopters began to pass overhead, and then the red lead cars arrived, closely followed by a breakaway group of three - an advanced party to whet our appetites: 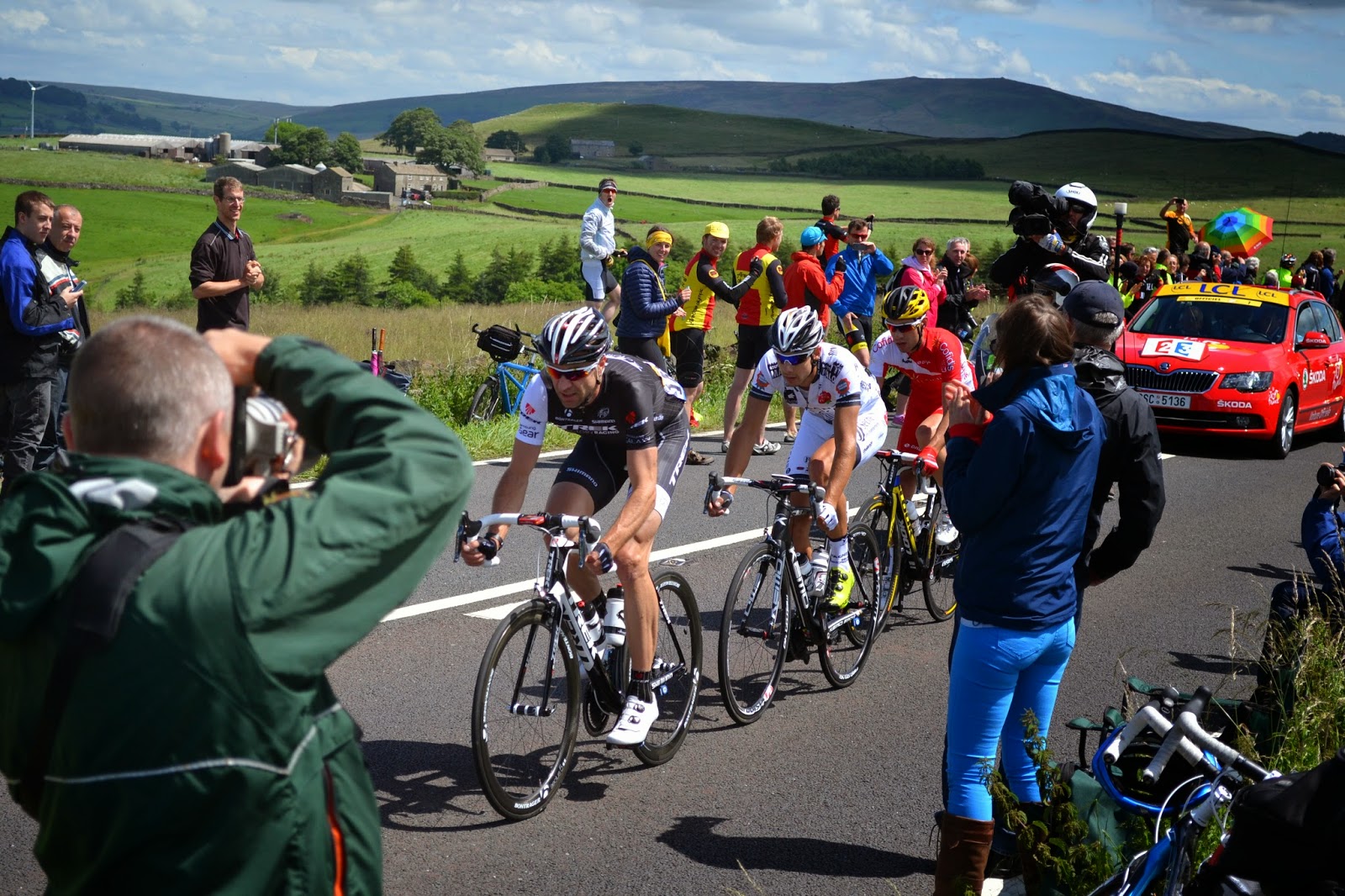 Then just a couple of minutes behind, in the distance came the media helicopter hovering over the approaching peleton - a lithe snake of tightly packed cyclists. 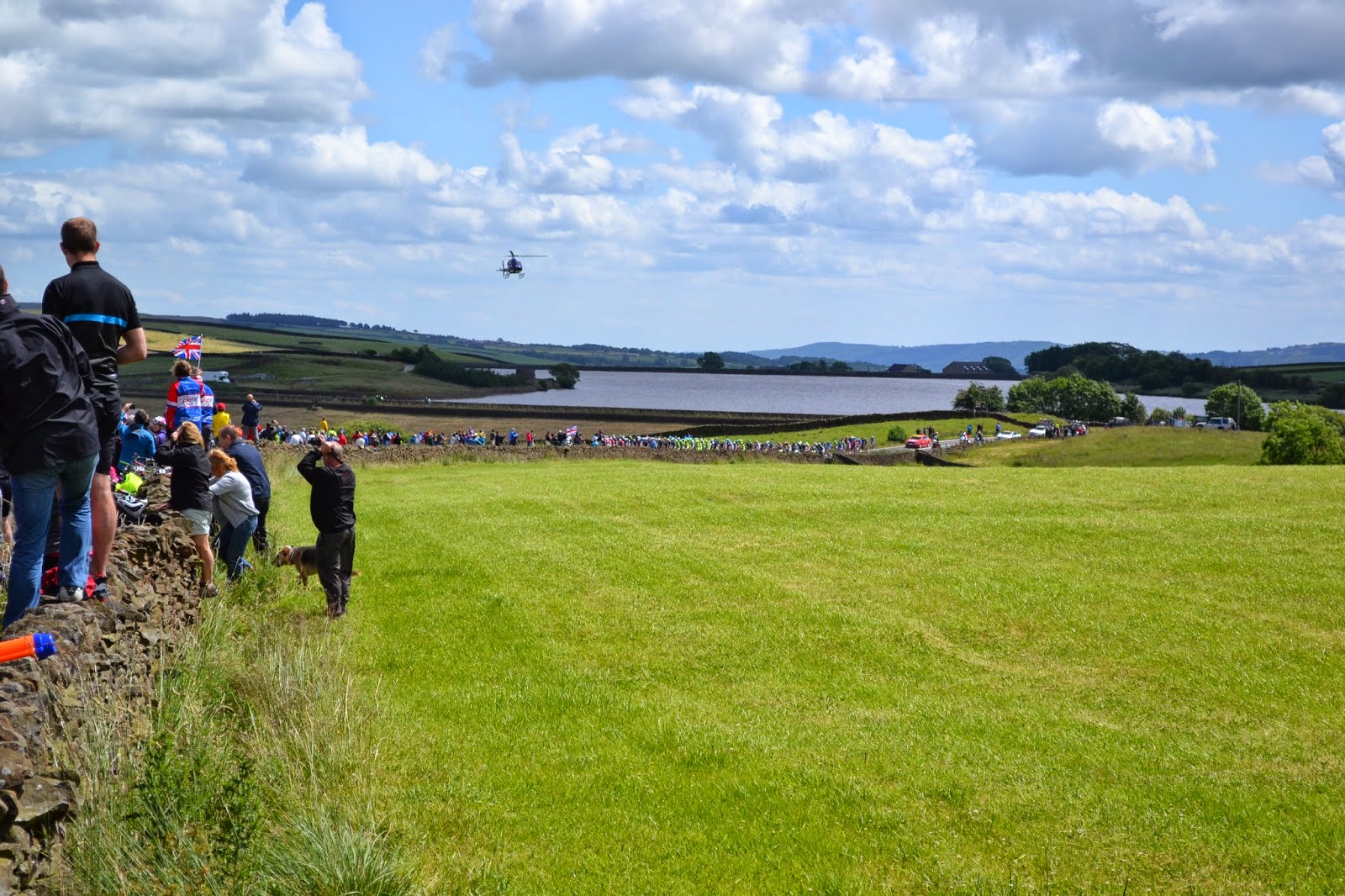 And then, in a flash of colours, the mass of riders flew through: 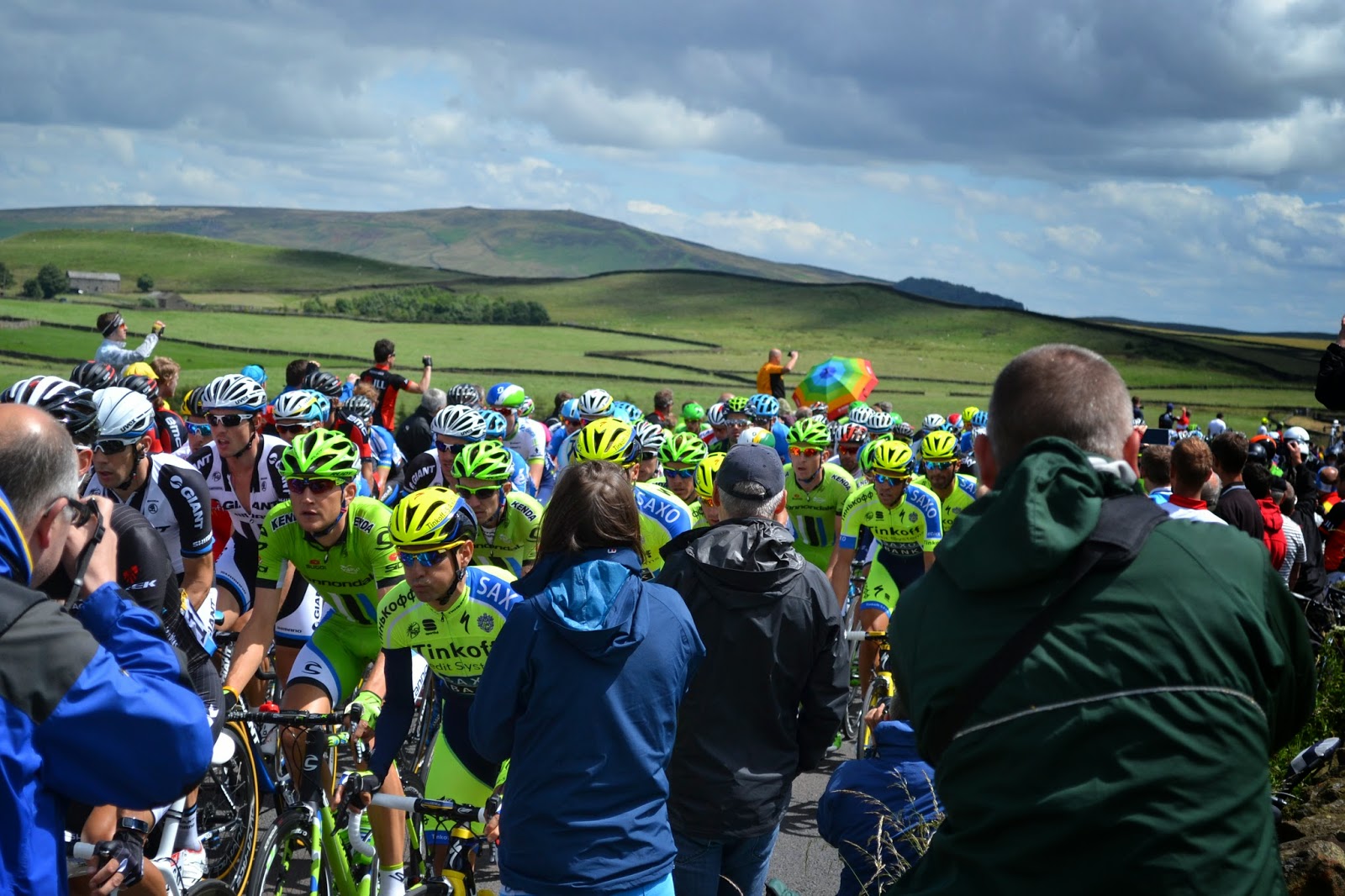 It is hard to describe what it is like to be so close to such a tightly packed group of nearly 200 speeding cyclists - there is a deep buzz of tyres on tarmac, the whistling of the air moving around them, and the stunning sight of the bright colours and rapid movements across your field of vision. And then there's the atmosphere - wildly electric, with the air full of whoops, cheers and delighted laughter. It's over almost as soon as it starts, but we were buzzing for ages afterwards with the excitement.

After a quick lunch at home, we walked the three miles into Skipton to watch the finish of the stage on the big screens they'd set up there, joining thousands of people in a collective groan of disappointment as Cavendish hit the tarmac, shoulder first, just hundreds of metres before the finish. We ate ice-cream in the sunshine, bought some Tour de France swag and then walked back in the sunshine to the house, our lust for the Tour temporarily sated.

On Day 2, we walked the 2 miles to Bolton Bridge and managed to find the perfect spot on the inside of a sharp left hand bend, where we hoped to catch the riders moving slightly more slowly. The crowds were much bigger than our previous day's spot, but the atmosphere was superb as everyone waited in the intermittent sunshine.

It was the same long build-up as the previous day - the caravan, then the sponsor and team cars, then passing helicopters, police motorcycles....and then the red cars followed by a small breakaway of 7 riders, with the peleton following 3 minutes behind. And the second time was easily just as exciting as the first...I even managed to snap a shot of the yellow jersey worn by the previous day's winner, Kittel. 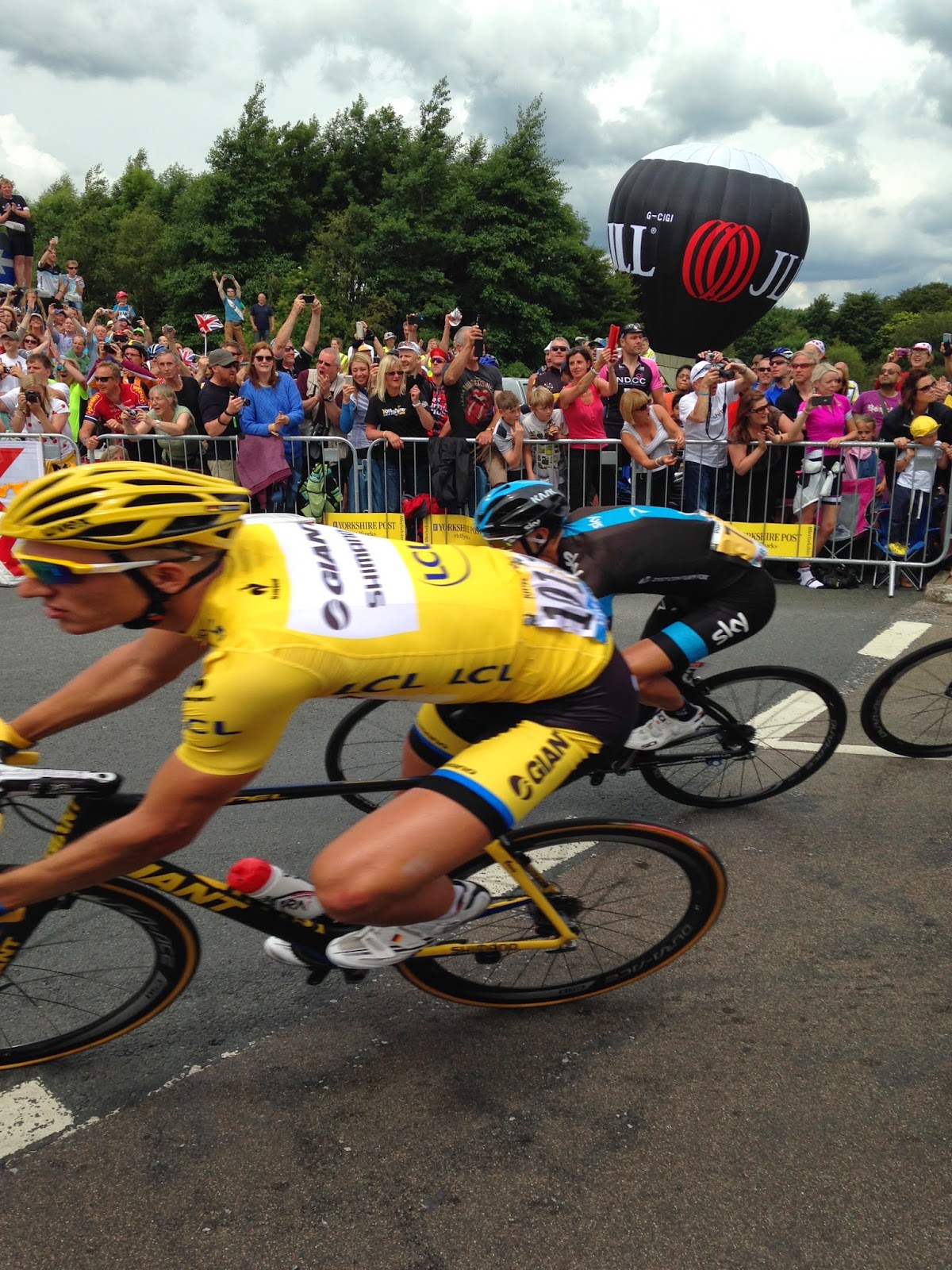 Our hope that they might be slower on a sharp bend proved to be foolish, but it was all the more amazing for that - such speed, so close together.

We had a post-race picnic in a nearby park and then walked back home across the fields between Bolton Bridge and our house in Draughton before all flopping down in front of the TV to watch the Tour finish and then the men's Wimbledon final. I don't watch a huge amount of sport, either live or on TV, but this was a hugely fun day very well spent with some of my very favourite people. A great weekend. 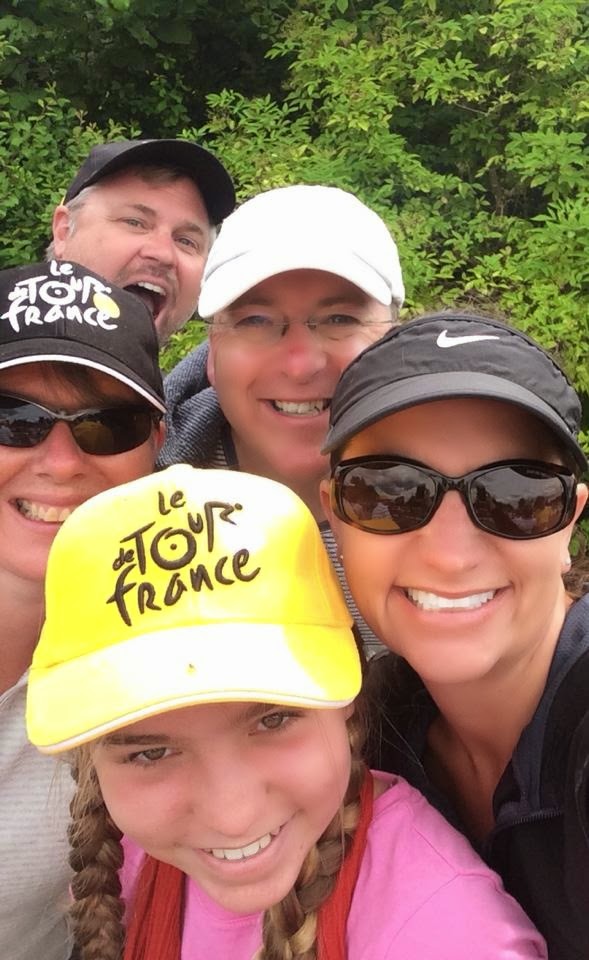 Posted by Karen Throsby at 06:31 No comments:

I've been having a couple of days in London. Unhappily, I travelled to Essex at the beginning of the week to join family members to say a very sad farewell to the wonderful Brenda, who lived a very long and happy life, and was both loving and loved. And after some family time, I decided to stay in London rather than go back up to Leeds since I had a work meeting at the LSE later in the week. And so I found myself in Stratford - site of the 2012 London Olympics (and a former stomping ground of Peter and I from our East London days). And so what could I do but go for a swim at the Aquatic Centre?

I have always had a lot of reservations about the London Olympics - the militarisation of the whole area, restriction of the freedoms of speech and movement, the bewildering amount of money the project went over budget, the crass commercialisation and the flag-waving nationalism all turned my stomach, even at the same time as I knew that I would enjoy the spectacle of sport on display. My concerns weren't allayed when I arrived in Stratford (my first visit since before the Olympics) and while looking for my hotel, I got accidentally channelled into the Westfield Centre - a massive shopping mall that you have to pass through in order to get to the Olympic park and which is also directly connected to the Tube station. Once in, I couldn't find my way out. It was as if they had made the whole of Stratford indoors and then filled it with a fiendish whirlwind of commerce, noise and bright lights. I ended up begging a man selling fruit smoothies from a walkway stand to tell me where "outside" was. I know that Westfield has brought a lot of jobs to an area greatly in need of them, but it's hard to believe that this grizzly monstrosity is the answer.

So, not a good start. But the next morning, I headed out for the Olympic park. It was a beautiful, blue-skied morning, and the aquatic centre is the first structure you come to; it's absolutely stunning - all sweeping scoops, dips, curves and waves. 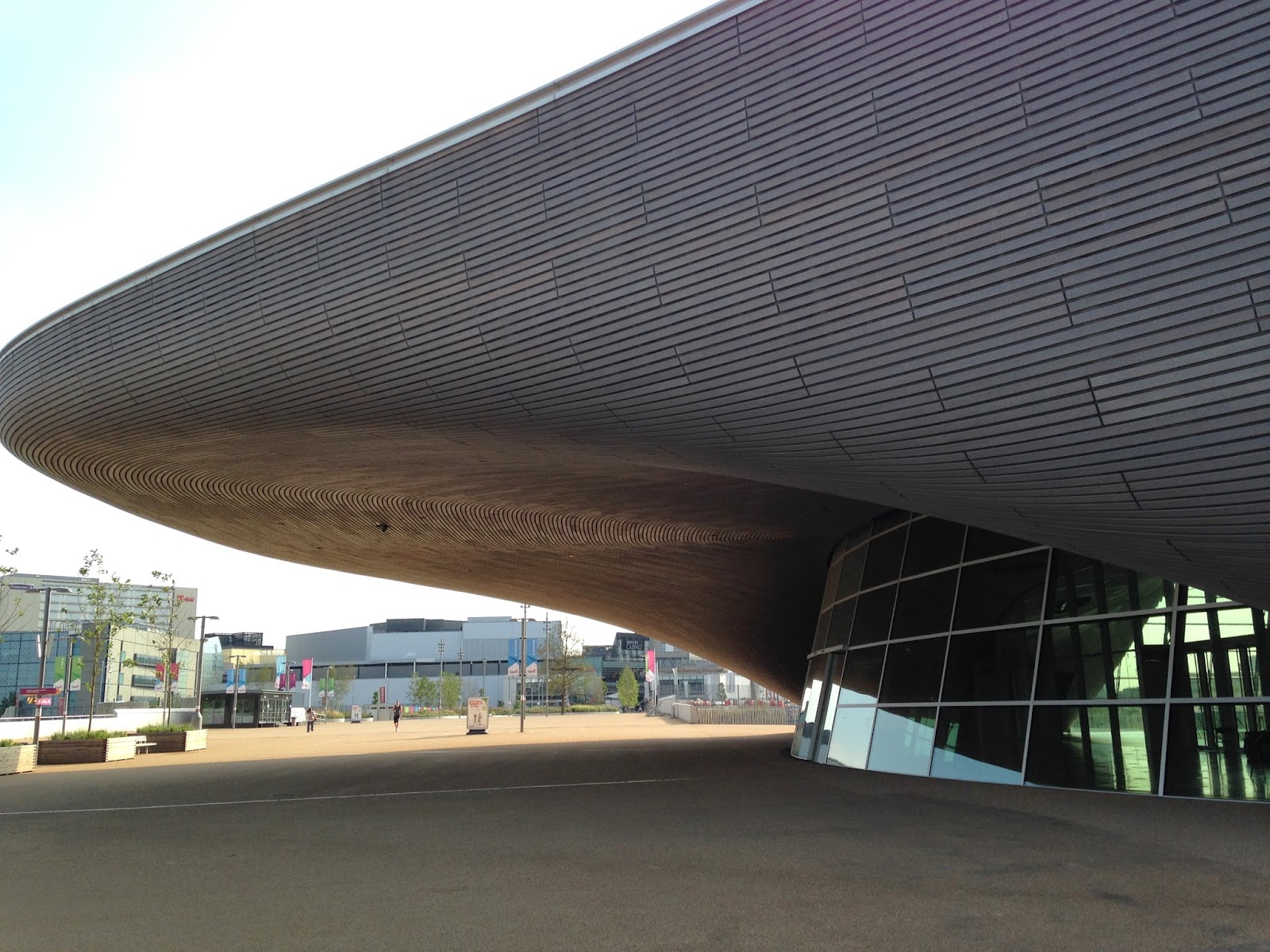 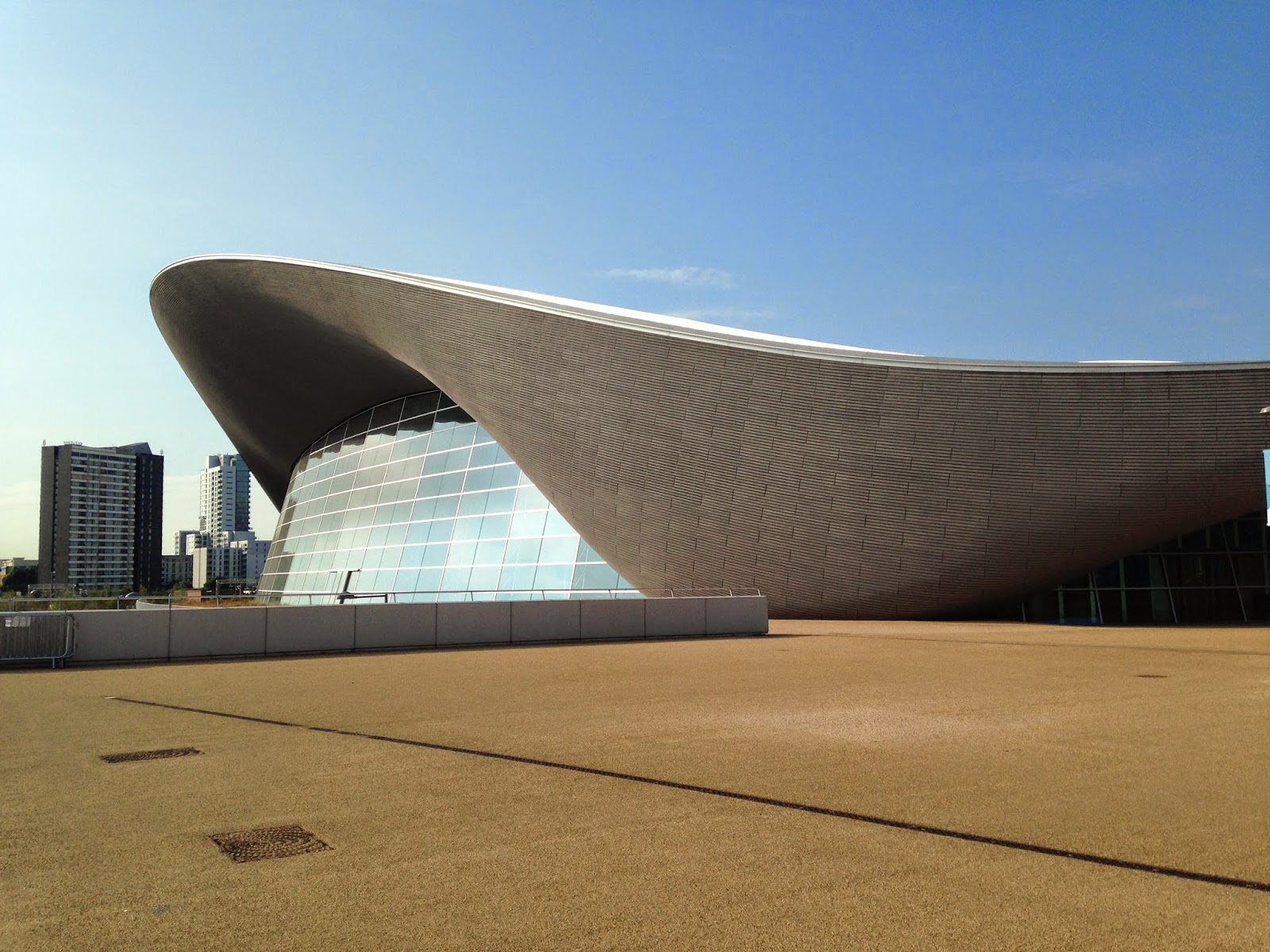 And you get the same effect in the light and airy inside: 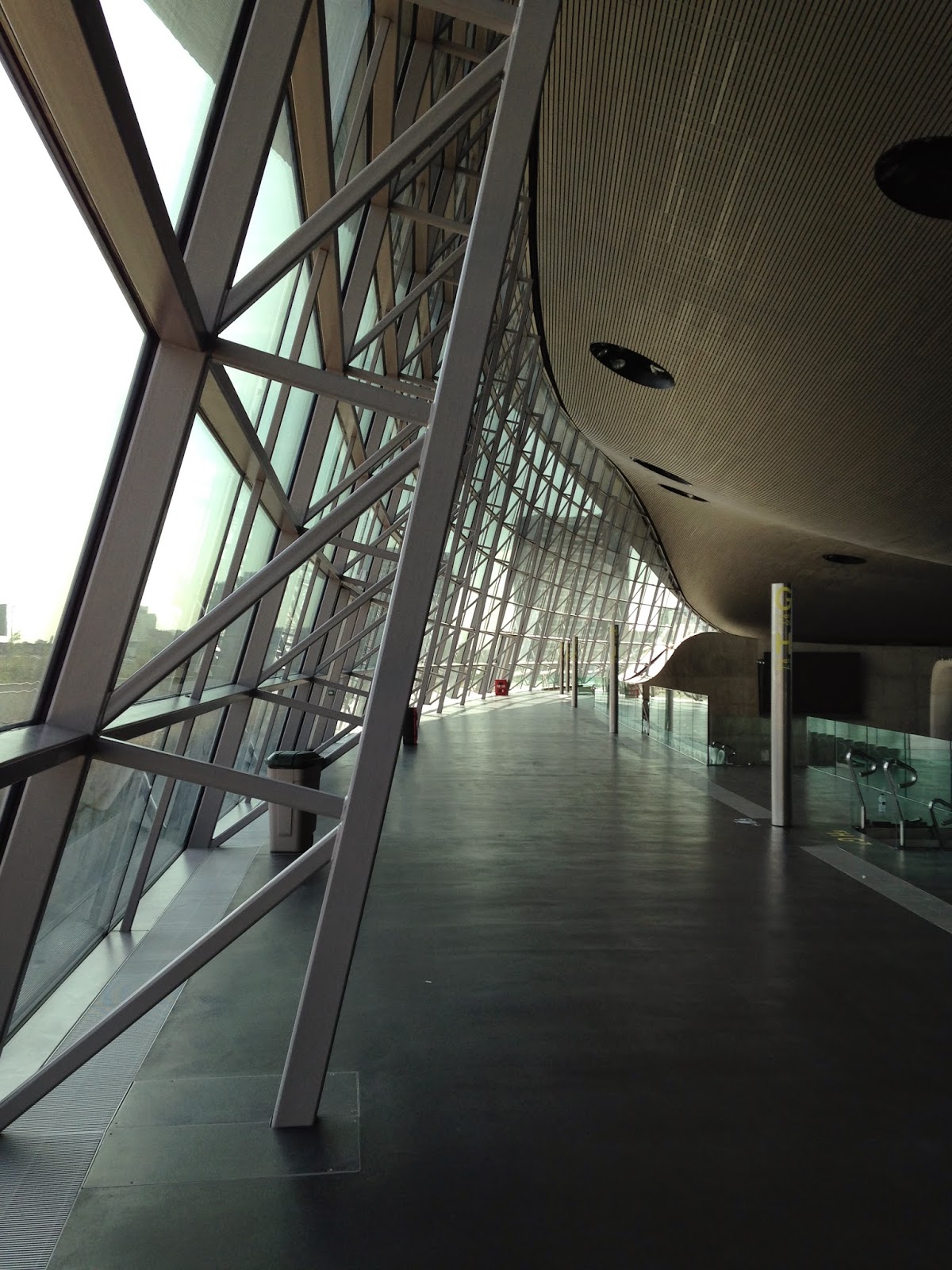 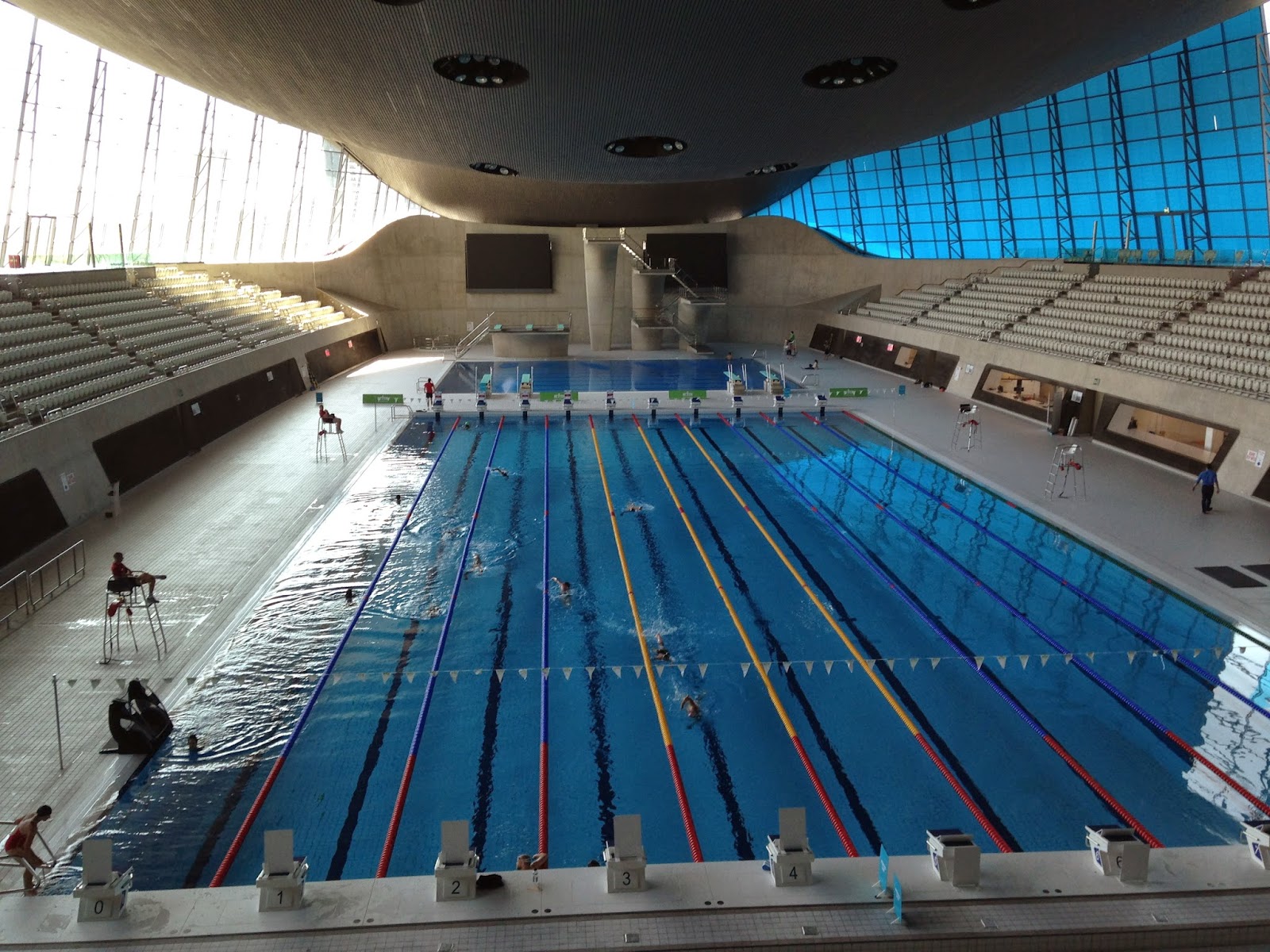 The competition pool is 3m deep and 10 lanes wide, giving a luxurious feeling of space; this was greatly enhanced by the fact that there was hardly anyone there and for half an hour, I had a lane to myself! It's nice and cool, and isn't heavily chlorinated, so is a delight to swim in. While most pools only have viewing galleries on one side, the rows of seating on both sides gives the pool a stadium feel that is compounded by its recent Olympic origins. In the momentary absence of other swimmers to join my clockwise lane circuit, I treated myself to a sprint down the black line to the roar of the crowds as I raced to victory - one of Olympic history's big upsets as the middle aged woman with the duff shoulder snatches gold.

Unfortunately, after half an hour and several golds, I was tapped on the head by a uniformed staff member and told that they were closing all but lanes 1-4 because they were going to be doing some filming. I moved over and 5 of us swam up and down the lane perfectly amicably, but it was still slightly annoying because the filming didn't actually start until over 45 minutes later. I felt like we could all have been left to enjoy our luxuriously solitary swimming a bit longer.

But that aside, it was a fantastic experience. The pool and changing areas are roomy and spotlessly clean, and the facility is priced equivalently to the other pools in the London boroughs; my off-peak ticket cost £3.50. The training pools were packed with children having swimming lessons, and divers were being coached while doing improbable things off high boards. It had a sense of legacy that much of the remainder of the Olympics infrastructure doesn't at the moment, which was nice to see. I hope that it continues to be a success and to be accessible to as many local people as possible, if only to demonstrate the palpable demand for more public pools at a time when public leisure services are being brutalised.
Posted by Karen Throsby at 13:55 No comments: