Every so often, I look through the different search terms that lead people to the blog. Most of them are very predictable ("Channel swimming"), a few are bit weird ("bottle in mouth"), and some are just annoying - in the case of this blog, mostly involving synchronised swimmer, Jenna Randall. 18 months ago, I wrote this post about a highly sexualised and completely non-swimming related "centrefold" of Randall in the Swimming Times. Not only is it consistently most viewed post on the blog, she dominates the search terms - sometimes just her name, or more creepily, things like "Jenna Randall swimsuit", or "Jenna Randall naked". All this sort of proves the point I was trying to make in the post ... but I digress.
So I looked through the search terms today, and one person had come to the blog via "I wish I swam". Whoever you are, I wish you did too. So if you're reading this, find a pool, sign up for some lessons and come and join the fun.
Posted by Karen Throsby at 05:42 2 comments:

A recent guest post by Ned Denison on Donal Buckley's blog has been doing the rounds on the swimming discussion forums. The post highlights the easy-to-overlook fact that every long swim is underpinned by very real time investment of a whole hoard of volunteers who crew, transport, help out at races etc. He calculates that a solo Channel swim accrues as much as 100 person-days of volunteer time, making the argument that swimmers need to give back to the sport by volunteering and not just swimming. Ned uses the notion of "taking advantage of" volunteer time, which I'm not sure is a fair representation of most people's engagement with the sport as swimmers or volunteers. To take advantage of someone, I would suggest, is different from gaining benefit from their volunteerism, and reciprocity is a much more complex affair than a simple exchange of hours. However, the point about needing to help out as well as swim is extremely well made, and I for one have benefited enormously from the time and effort of others. As many people know, Channel swimming is a solo sport achieved by a team of people, only one of whom usually gets the plaudits.
With this in mind, I recalled my recent experience of volunteering at a running event in Stratford. I was supposed to be attempting the 10km run with two colleagues from work, but frustratingly, pulled my achilles tendon two weeks before and had to withdraw. Not wanting to just abandon my two colleagues, I volunteered to help out with registration, and then marshalling so that I would be able to cheer on my friends. So for two hours before the race, I stuffed goodie bags, handed out timing chips and numbers and generally scurried about; and then I spent an hour on a water station, passing cups to grateful runners. And I have to say, it was a huge amount of fun. It is always awe-inspiring to see the top level runners steam-training past, but my heart is with the less speedy - all shapes and sizes, all manner of running styles. Most people smile and say thank you as they grab a cup; some are just too tired and having to concentrate (a feeling I know well). It's all very inspiring, and even though I would dearly have loved to have been able to do the run, it was a good morning out nevertheless. I recommend it.
One thing that I do find difficult is the people who seem to forget that this is a leisure activity and behave like complete morons - for example, the man who stormed up to my registration station to protest that his goodie bag didn't have a bottle of sports drink like everyone else had when he'd paid the same money. I pointed out that this was more likely to have been a mistake than a deliberate plot to deny him his full value for money. I remember helping out at a local sprint triathlon once and being responsible for counting swimming pool laps. One competitor felt that I had miscounted his laps (an entirely feasible possibility) and subsequently, his overall time had been about a minute slower than it should have been, leading to a great deal of complaint and recrimination towards me. It's not the Olympics; take a breath.
But thankfully, these are the absolute minority, and in the run and other events where I've helped out, everyone has been utterly charming. But it's a point to remember, and as I wrote about a few weeks ago - it's only swimming (or running, or whatever). Smile, say please and thank you, and have a good event - that will keep most volunteers happy. Oh...and chocolate and biscuits are also appreciated.
One of my biggest frustrations about Channel swimming is my inability to go out on the boats. Now that I have more experience as a swimmer, I think I could perhaps be useful as support crew; plus, my job means that I have considerable time flexibility over the summer, making it easy to be 'on call' for a swim. But sadly, until I can find an effective way of dealing with the seasickness, this isn't really an option. Also, my land-locked location means that I'm not able to be part of a training community where reciprocal exchanges of kayaking / feeding duties become part of the everyday training process (as in Sandycove, for example, or in San Francisco). But I think that Ned's blog post is a very timely one, and I definitely need to think more about other ways to support upcoming swimmers....
Posted by Karen Throsby at 03:29 1 comment:

The white cliffs of Dover

This isn't really a swim-related post, except that the white cliffs of Dover are completely iconic of the English Channel, and anyone who has swum the Channel and sneakily peaked backwards in the first couple of hours will tell you that they never seem to get any further away. But yesterday, the cliffs experienced one of their periodic collapses, probably as a result of the rainfall over the winter. I love the whiteness of the newly exposed cliff face, and the pile of thousands of tonnes of chalk rubble seeping slowly into the sea. Particularly in the first shot, you can see the history of these collapses bitten into the coastline. Amazing. 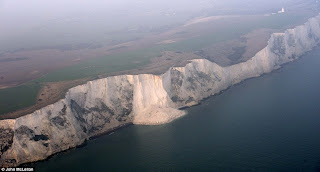 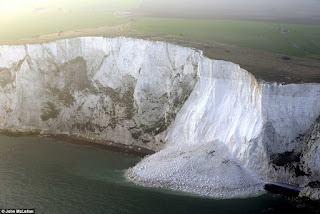 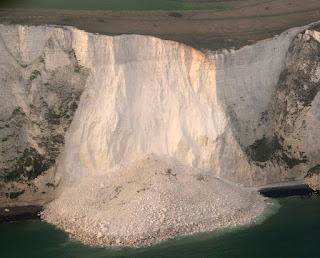 But next time I'm there, I won't be walking quite so close to the edge.
Posted by Karen Throsby at 03:15 No comments:

As regular readers may already know about me, I have a weakness for small electronic gadgets - anything that measures, records and makes charts and maps of sporting activity is especially appreciated. I should add that this is somewhat at odds with my complete lack of technical capacity; I have no real understanding of how these things work, and what's more, I don't really care. I just want them to work.
Anyway, one of the things about swimming (unlike something like triathlon, for example) is the relative lack of gadgetry, outside of lap-counting watches (also greatly appreciated, given the tendency for my mind to wander while I'm pool swimming, causing me to lose count after only a couple of laps). Until very recently, the possibilities for excessive recording of data were fairly limited, but then - oh glory of glories - comes not one very promising GPS-based OW swimming gadget, but TWO.
The first is the Garmin 910xt: 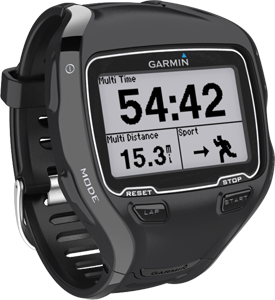 Worn on the wrist, this is an all-singing, all-dancing triathlon device, promising instant feedback across a variety of metrics.
The second newcomer is the Finis Hydro Tracker: 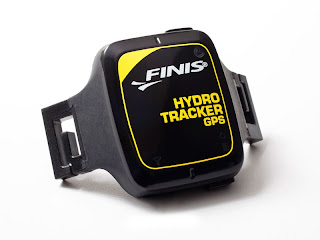 This clips to the goggle straps on the back of the head, and gathers data which can then be downloaded onto a computer later.
I'm not in a position to offer a review of either of these, but am, inevitably, trying to decide which one I should go for....because let's face it, it's only a matter of time in spite of my very best intentions to resist. So how should I decide....and what factors am I choosing between? (I should add that I have no connection with either company and these are only my personal views....although if Finis or Garmin are reading this, my loyalty can be easily bought in exchange for shiny toys).
Well firstly, the Garmin retails around the £350 mark, so it's quite an investment. The Finis Hydrotracker isn't yet available directly in the UK, but is retailing at $129 in the US. So, in absolute terms, there's a significant price difference between the two. Secondly, there is the difference between immediately available feedback versus post-swim analysis. The possibility of getting that instant feedback from the Garmin is very appealing, especially given the tendency of my attention to wander in the OW and drop off the pace. However, at the end of the day, I'm not sure whether that's something I'm prepared to pay the extra £200 to have. And the final important difference between the two is how they are worn. To gain the benefit of the instant feedback, the Garmin has to be worn on the wrist (as intended by design), while the Hydro Tracker is on the back of the head. My wrists and hands are quite small, and I find that large sports watches aggravate the ongoing tendon problems that I have with my right wrist. So I wonder how long I would be able to swim with it on. I'm assuming that I would get used to having the unit on the back of my head, but I'd be very worried about losing it.
I'm sure that there are far more subtle differences between the two, but at the moment, I'm dealing with the two different concepts rather than their specifics and trying to decide which is the best option to go for (if at all...). Any advice from the early adopters out there?
Posted by Karen Throsby at 10:34 2 comments:

Well, I think it's too soon to pronounce the relocation of my swimming oomph, but this evening, I decided that a bit less moping and a bit more effort was in order. So, I decided to put the technique focus and drilling on the back burner, and do a simple set of 10 x 400m, mixing easy, medium and hard effort straight swimming with a couple of sets of kick and a couple of pull. For the final 400m, I tried full effort, and successful knocked 20 seconds off my 400m time for this time last year. So maybe some of that technique work has sunk in after all.
A much-needed bit of encouragement.
Posted by Karen Throsby at 14:46 No comments:

Has anyone seen my missing oomph?

I seem to have lost my oomph.
I'm not sure why, but lately, going to the pool has become a real chore and I just don't feel like I'm making any progress. I've been working on my technique for a good 5 months now, and although I think there are some positive changes there, the work of drilling those in is long and slow, and I'm still finding that I slip back into old habits when I try to go fast, or swim for any distance. This has always been a tension for me - one of the reasons I love to swim is the quiet head space of inattentive, zoned out long swimming, but the work of becoming a better swimmer requires exactly the opposite. So now I just feel frustrated and demotivated.
I'm sure that a lot of this has to do with being confined to the pool, which is just nowhere near as much fun as the open water. Plus, I don't have a big swim planned for this year, so the motivation to knuckle down isn't there in the same way to get me through the dog end of winter. But whatever the reason, my oomph is missing in action.
So if you see it lying around, I'd very much like it back.
Posted by Karen Throsby at 06:56 4 comments: