I read today that the UK's Amateur Swimming Association (ASA) has issued a new swimwear guidance that allows for exceptions to the usual rules for competition swimwear on the grounds of religious belief or pre-existing medical condition. These changes are in response to a review requested by the Muslim Women's Sports Foundation (MWSF), who highlighted growing participation by Muslim women and girls in sport and the need to foster this interest by maximising the possibilities for access. The revised rules allow the use of textile full body suits that do not have the potential to enhance performance and which have been approved by officials in advance. This change to the rules will primarily benefit those women and girls whose religious beliefs mean that they would prefer to cover their body.

The ASA guidance includes these images of the kinds of suits that are included by the new guidance: 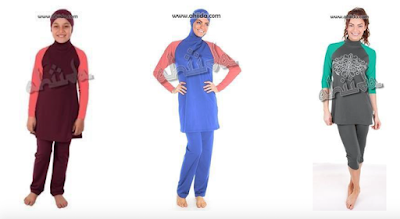 The guidance also includes examples of suits that the revised rules will continue to exclude:

There has been some predictable grumbling on social media about the changed rules potentially serving as a back door to performance enhancing body suits, but this is clearly not the purpose or consequence of this ruling. It's also important to note that this is distinct from recent FINA changes to the rules about wetsuits in competitive open water swimming, which have also caused controversy in the open water / marathon swimming / triathlon communities. Instead, this new guidance is simply a way of enabling more women and girls to compete in swimming, and that has to be a good thing.

BME communities are notoriously poorly represented in swimming (all kinds, all levels). This is due to a combination of factors including lack of access to affordable swimming lessons and facilities and the lack of perceived 'fit' with the sport (i.e. children being pointed towards other sports, or being told that 'black people can't swim' because of outdated and racist assumptions about bone density). This poor representation is particularly true for women and girls. There is also the legacy of the historical exclusion of non-white people from swimming facilities - for example, during segregation in the US (see Wiltse's 2007 book, Contested Waters, for a frank and disturbing account of this) - which has ongoing generational impacts in terms of facilities, expectations and a paucity of role models.

So this small change in the swimwear guidance isn't going to solve the problem of the whiteness of swimming, but it is an important beginning, and signals the active valuing of participation and inclusion to those outside of the sport who might like to give it a try.

And this got me thinking about other branches of the swimming world where strict costume rules apply, including marathon swimming. This is a sensitive and hotly contested area, but it seems to me that marathon swimming is in a position to be among the leaders in the field of amateur endurance sport by actively incorporating amendments of this kind to swimwear rules. Changes like this to the regulations by Channel / marathon swimming governing bodies are relatively costless, since they would not confer a performance advantage on swimmers wearing full body costumes, but would demonstrate an openness to the social diversity that is currently lacking. It's a small measure, but one that I think would speak volumes in welcoming new swimmers to the marathon swimming community.