On Sunday I went back to see Active Blu's Emma Brunning for a follow-up coaching session. I last saw her in January (which you can read about here), and have been diligently practicing my drills on every pool visit. I am a firm believer in the value of expertise and taking advice; there is no point in paying someone for coaching and then not doing what they say. But then again, you can take things too far.

On a positive note, I have managed to make significant progress in several key areas. In January, we highlighted my dancing hands, sinking elbows and late catch, alongside some breath-holding and finger-splaying, as the key obstacles to progress. In particular, I wanted to focus on anything that has been putting unnecessary strain on my shoulder, with injury rehab and prevention at the top of the priority list; an increase in pace would be a bonus, but always a secondary one. Consequently, the first three in this list have been the focus of most of my pool work since January - lots of kicking on one side, lead arm out front; scull; dog paddle. And though I say it myself, I think the results speak for themselves in these before and after (January / May) shots, especially the first two of which literally measure my progress by degrees: 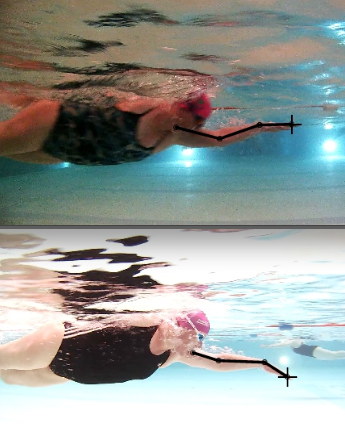 There's still plenty to work on, but as you can see, I've now managed to engage the body's useful "bending at the elbow" function to form a catch that happens at the front of the stroke and gives me a much better purchase on the water to move myself forwards. Similarly, in the bottom photo, you can see that my elbow isn't dropping quite so much, with shoulder, elbow and wrist in descending order, ready to start the catch phase of the stroke and removing the little dance my hands used to do as they swept upwards towards the surface before scooping back down again.

But...and this is a significant but....every action has a reaction, and in the process of fixing these flaws, I developed a whole new one that I've never experienced before - a completely dead spot at the front of each stroke. This isn't really overgliding, so much as, well....just stopping. Emma had her eye on it even when I was warming up before my lesson had started, and the numbers set out the stark reality - my usual stroke rate of around 62 had fallen to 50! I can see exactly how this had happened - the upward drift of my hands had been so ingrained that particularly in January and February, I was having to be constantly vigilantly, glaring at my hands and actively willing them not to move from their carefully landed position in front of me. This, in turn, caused my legs to drop, and then my head to rotate to breathe slightly out of sync with the rest of the body's rotation. For a tiny fraction of a second in each stroke cycle, everything came slightly undone, then was snapped back into place by the next stroke. This is what I mean by having overdone it - I think I had become so focused on the 'problem' that I had lost touch with the bigger picture and then with the confidence to swim without overthinking.

Thankfully, Emma had the cure in the form of a Finis Tempo Trainer. 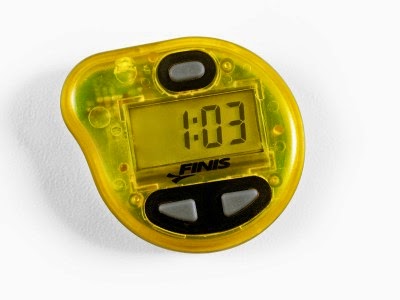 I have a precarious relationship with these things - I like the lap pace function (a discrete triple bleep at a set interval), but I find the bleeping on every stroke infuriating. But sometimes needs must, and a stroke rate ramp test soon revealed the unavoidable truth that at 50 stroke per min (spm), I was struggling and uncomfortable, and then at 64 spm, I felt more like my old swimming self than I had for months. At 66 spm it all started to collapse a bit, and I may or may not end up inching it up slightly once I've really swum all this in, but the upping of my stroke rate eliminated the pause and my pace shot up markedly as a result. Sometimes you just need the experienced eye of another to point out a retrospectively obvious but somehow inaccessible truth.

There are other things to work on still - especially my habitual breath-holding and the splayed fingers, as well as the tendency to fall back into the S-shaped pull I learned as a child. But the priority now is to get my confidence back in my stroke and really settle in to my new technique for the summer; in short, my priority is to swim.