Last Tuesday, I swam the length of Windermere in 5 hours and 47 minutes. 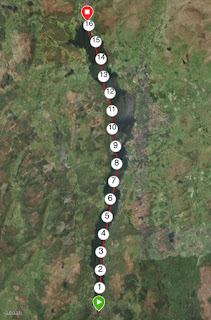 In the world of marathon swimming, and particularly now that the swimming season is in full bloom, this is a fairly mundane accomplishment. In fact, there was a time just a few years ago when a 6-hour swim was just a bread-and-butter training day for me, often tied back-to-back with a swim of similar length the following day to get endurance miles in the shoulders. But not this year; not on Tuesday. Tuesday was the culmination of 2 years and 3 months of injury and rehab to my back, neck and shoulder; it was my longest swim since I was injured and it was the first time since May 2017 that I have felt solid and strong enough in the water to swim in a sustained way. And it felt amazing. That night, I sat in the van and cried with delighted relief.

There have been a number of points since I was first injured that I have thought that I was okay, but each time, the recovery was too superficial and any effortful swimming soon broke the fragile truce I had reached with my body. I had started to think seriously about the possibility of not being able to return to swimming and had even begun some tentative ventures into running and cycling by way of a Plan B, just in case. But then, really only in the last 6 weeks, everything started to fall into place and I began to rediscover my swimming self, adding longer swims to my Lake District trips without the regression into pain and immobility that had happened previously. I swam the BLDSA Coniston event a couple of weeks ago by way of a test swim without any negative consequences (apart from some ferocious duck itch...occupational hazard) and finally committed in my mind to the Windermere swim that I had booked months ago in a fit of optimism.

When the day came, I was as nervous as if I was doing a Channel swim and had spent the preceding week glued to the constantly changing weather forecast. I watched storms pass through dumping huge quantities of rain that ran into the lakes and rivers, lowering the water temperatures and threatening floods. But I was supremely lucky, and amidst a wet and windy couple of weeks, I landed an almost perfect swimming day. 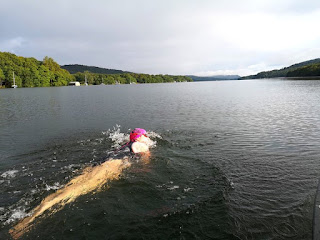 In spite of the rain, the water was still deliciously warm from the good weather in July, and there was just the gentlest of breezes for most of the swim, licking up just a little towards the end as we began to cross the lake in the final 3km of the swim into Waterhead. I was accompanied by Pete Kelly of Ambleside's Swim The Lakes, who provided navigation, safety cover and support from his canoe, and was a wonderfully calm presence, quietly paddling alongside, guiding me round hazards and protecting me from boat traffic. By hour 3, I started to feel like I was hitting my stride, and by hour 5, even though my lack of stamina from my long lay-off was starting to show, I had rediscovered the glorious feeling of belonging and comfort in the water that only comes (for me, at least) during long swimming. I was tired at the finish and relieved to be able to stop having achieved my goal, but I could have done more, and I finished feeling confident that with more training to build my endurance back up, I will be able to do more and go further (if I decide I want to). It feels unspeakably good to be back.

But none of this tortuously slow return to swimming has happened by accident and it has taken a lot of work by a number of people to get me back to this point. In the first year of the injury, I worked with a local osteopath and a massage therapist, both of whom did a great job of relieving the trapped nerves and the most obviously rigid muscles that were impeding movement and causing pain. But while this treatment always helped, it never really got to the heart of the problem. It's hard, though, to stop a line of treatment with people you like and trust when it seems to be working, even if only very gradually, and in hindsight, I left it too long before looking for alternative solutions. It was only when I started working with Cumbria-based injury and rehab specialist, Adam Smith (@adamsmithrehab on Twitter) last year that things really started to move noticeably in the right direction. I've had two sustained courses of treatment with him - at the end of last summer, and throughout this summer - during which he has worked relentlessly through scar tissue and taut muscles, restoring movement in my thoracic spine (which turns out to be the heart of the problem) and shoulder (which often felt like it was the problem, but was really collateral damage). The damage was quite deep and long-standing and it's been a drawn-out (and often quite painful) job that has demanded a great deal of expertise, effort and tenacity from Adam. But quite recently, everything started to change and I noticed that swimming was relieving my back rather than aggravating it; the restored movement seemed to have set up a positive cycle where movement produced more movement rather than immobility, which Adam had been promising would eventually happen but I never quite believed him. Amazingly, when I saw Adam after the Windermere swim, he could barely find the band of scar tissue that he's been digging away at for all this time, and since the swim, I've had almost no symptoms at all. My recovery is still ongoing and I am diligently doing all of my rehab and mobility exercises to fend off even the hint of recurrence, but the state of my recovery is so markedly different from any of the previous times of the last couple of years when I thought that I was on the mend that I am feeling very confident that we have it properly on the run now and that I am (cautiously) back in business.

But what does it mean to say that I am back in business? At the moment, I'm not sure. Part of me - a big part of me - wants to set my sights on something long. I have a couple of swims in mind that I am keeping to myself for now, but in any case, I will need a very long and steady run-up to anything substantial. It took me two years to train for the Channel, and using this as a model, 2021 would be the absolutely earliest for anything really long, although I'm also thinking about interim, build-up goals for 2020. But I'm also not 100% certain that I'm going to go back to very long swimming. If it is a choice between being able to swim Windermere-length distances and below, but to swim regularly, often and consistently, and having a big blow-out swim that might leave me out of the water for an extended period again, I would undoubtedly choose the former. I've had a wonderful summer in the Lakes, swimming, paddle-boarding and enjoying the beauty of it all; I don't want to risk losing that again. 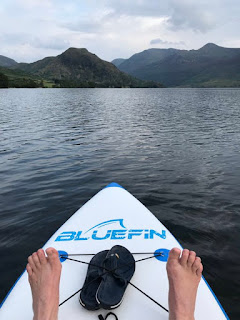 I'm also uncomfortably aware that when I was first injured in 2017 and in subsequent moments of optimism over the last couple of years, I ended up letting quite a lot of people down, having to cancel swims and inconvenience friends who had been generous enough to make arrangements to crew for me. I really don't want to be that person, and this makes me cautious about diving back into it all again. Time will tell.

But the most important thing for now is that swimming is back in my life. My working life has been very challenging over the last year and without swimming to blow of steam, get my head straight and wear myself out, by last spring, I was experiencing high levels of stress, anxiety and insomnia that were impacting on my mental and physical health in unacceptable and unsustainable ways. Swimming is not the answer to these problems, which are fundamentally structural in nature rather than a personal failure of self-care, but it certainly helps to keep me going while I focus on ways to find a better balance in my working life. I feel better going into the next academic year knowing that swimming is there to fall back on.

I am grateful to so many people for sticking with me through this rather drawn-out palaver and helping me find a way through it. Adam has been amazing; Scarborough osteopath Neil Corcoran found bits of me to pop and crack that I didn't even know existed or were supposed to move; my local osteopath, Louise Judd, has been a steady influence throughout, helping to ease my body towards recovery; and Leeds massage therapist, Jim Mason kept me up and moving over the winter months. Skilled experts, one and all. Nevertheless, I have to confess to hoping that this is now the beginning of being able to focus my disposable income on something other than treatment... although I'm also very aware of the incredible privilege that comes with being able to engage with this kind of therapeutic expertise, and I'm very grateful that that option was available to me.

As we head into the dog-days of summer and as the beginning of the new academic year looms large, I'm looking forward to some final trips to the Lakes for swimming and paddling fun as I rediscover my love of swimming. We'll have to see what happens next, but for now, if you need me, I'll be in the water.
Posted by Karen Throsby at 09:15 No comments: