After the small victories of my last post come the small defeats....or at least the defeats that I hope are small. For the last week or so I've been experiencing quite a lot of stiffness in the upper back between my shoulder blades. I thought that this was just the result of the muscles adapting to the increased training, especially given the change in my stroke over the last year which now relies much more on the big back muscles than it used to. I've been stretching a lot to ease it out and assuming that my body would adapt to the training. But in the last few of days, this has morphed into something much more painful, especially when I'm lying down, causing trouble sleeping. I've had two days of enforced rest from swimming while my tooth recovers from my latest bout of dentistry which has helped a little, but it's definitely not right. I seem to be falling to bits. I've made an appointment to see the physio on Monday and I'm sure it's nothing that time, rest, and a bit of poking and prodding won't fix. But the timing is terrible with only two weeks to go before I go to Mallorca, especially since I already feel like I'm on the margins in terms of adequate training.

With this in mind, the urge to press on with training regardless is very compelling - each day of rest no doubt improves my chance of fixing the injury, but each day without training feels like it pushes me further away from being able to do the swim. Grrr.

But I am a grown-up, nominally at least, and will be sensible. For now. I need to keep my eyes on the bigger goal - MIMS - and can't risk messing things up by not fixing this properly. As I said....hopefully, just a small defeat.
Posted by Karen Throsby at 02:40 2 comments:

Sometimes training can feel a bit of a slog. Especially with the pool training, it can feel like a lot of going nowhere. So, since Christmas, I built in a weekly 1500m time trial to get some sense of progress (or not). The results have been a bit mixed, not least because I usually do this on a Tuesday night at the end of a long day of teaching that starts at 10am and finishes at 8pm. But still, with the 1500m time of 24.40 that I put on my MIMS application last November in mind, I've been inching this down slowly. On bad days, it's been around 25.15, but this is usually because I haven't been able to grab food between classes and am too tired and hungry to swim well. But recently, I've been dipping consistently below 24.30, and yesterday, I managed a PB of 24.15. As usual, there's probably no need to alert the swimming authorities, but still, I was chuffed.

I've been using the Tempo Trainer, and have discovered a weird psychological quirk that really helps me. If I set the TT to 1.37 / 100m (which would equate to 24.15 for 1500m), then I get all stressed and tense and inevitably slow down and miss the turnarounds. But if I set it to 1.40 / 100m, I feel buoyed up by the fact that for every 100m beep I inch further ahead of myself, measuring my progress at each beep against the pillars and piles of kick boards and pull buoys along the side wall of the pool. This is what I did yesterday, and the sense of progress takes the stress out of it and makes the beeps more encouraging than tyrannical. It's a bit daft, but whatever works...

But the good news is that I am slowly speeding up, and I'm getting better at keeping my stroke together under stress, only lapsing into my drowning chicken display under extreme duress. I have now set 24.00 as my 1500m goal for the end of the season. Watch this space. But in the mean time, the small victories help on the way to the bigger swims to come.
Posted by Karen Throsby at 14:00 No comments:

But you swam the Channel....

This week, I had to go to the dentist. It is a mundane bit of everyday life that has no obvious place in a swimming blog, except that it's not at all mundane to me because I am scared of the dentist. And historically, I have dealt with this rumbling fear by easing myself into a powerful state of denial and simply not going. I eat well and clean my teeth with almost religious fervour, and in exchange, I have allowed myself to give in to my fear of dentistry and only engage with it very sporadically. In this case, it has been 4 years since my last visit. But then, last weekend, I munched on some delicious wholemeal bread, packed full of seeds and grains; biting down on a hard seed, a chunk of one of my back teeth broke off.   Even in my well-rehearsed state of dental denial, I had to accept that I couldn't just leave this - I'm a coward, but not an idiot.

Setting aside the cruel irony of busting a tooth on a food product presumed to bestow all kinds of health and well-being, the reason I'm telling you all this is what followed. I told a few people what had happened, no doubt seeking sympathy and support for my imagined ordeal to come. Several of my confidantes expressed surprise at my fear of the dentist, probably because I'm 45 years old and should know better, but also explicitly because they saw it as at odds with the swimming: "But you swam the Channel..." they exclaimed. I've noticed that this comes up at other times too - for example, if I complain that I'm very tired, or if I express disgust at something: "But you swam the Channel...".

I'm intrigued by what this says both about how I am seen, and about how Channel swimming is seen. When I was training for my Channel swim in 2010, my colleague and friend, Rachel Cohen, categorised for me the negative responses that I had received (and that she had received when telling people about it in her role as vicarious follower of Channel swimming) in the following schematic, drawn on my office whiteboard: 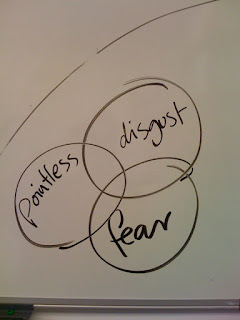 There's a lot of talk within the marathon swimming community, especially in the ongoing debates about maintaining the 'purity' of the sport, that people outside of the sport might underestimate its challenges in the wake of high profile or undeclared 'assisted' crossings. But my experience is really the opposite - that people overestimate it, often projecting their own fears onto their imagination of what the swimming involves. Many people, including competent swimmers, fear deep water because of the inability to see what lies below; others are disgusted by imagined slicks of pollution, sewerage and other sordid nasties. As an aside, my favourite response so far to the news that I'm doing MIMS is: "But isn't it full of bodies?" By extension, then, these assumptions also presume my own bravery in overcoming these obstacles (and perhaps the foolish pointlessness of doing so) - a bravery that is projected into a universal character trait that then presumes my immunity to fears in other aspects of my life, both irrational and rational. This is very far from the truth.

Firstly, fear is highly contextual and idiosyncratic, especially where fears are irrational or disproportionate. Someone who fears the pollution of dead bodies floating in the waters around Manhattan does not necessarily fear the dentist. And secondly, it's only brave if you're afraid of it in the first place. Swimming the Channel says nothing about my ability to overcome fear, since there is little about it that I find frightening. I have certainly felt moments of fear: for example, at the start of my Catalina Channel swim I was almost paralysed with fear about sharks when it was time to jump in. I have also had moments of profound disgust; a shiver of repulsion still runs down my spine when I recall getting a jellyfish full on in the face in Dover harbour - squishy body, then long tentacles dragging across my face and then down the full length of my body. It was toe-curlingly vile, and it was only the embarrassment of having to explain why I was getting out that kept me in the water. But in the bigger picture, I am neither afraid of, nor disgusted by, Channel swimming, and as a result, I don't experience it as a 'brave' thing to do. (I do think it's pretty pointless, but for me, that's the glory of it).

In short, then, having swum the Channel did nothing to help me when I sloped reluctantly to the dentist last week, just as my ability to be in cold water for long periods has done absolutely nothing to change my complete intolerance of the cold in any other setting (central heating, layers of clothes, electric blanket...I want it all). Context is everything.

And my tooth is fine, thank you for asking. Or at least it will be after next Wednesday when I've had the permanent repair done. Perhaps I'll just go swimming instead....
Posted by Karen Throsby at 07:07 1 comment:

It's been a difficult month or so, with more work than I had planned for and a lot of disruption to my already tightly packed schedule of eating, sleeping, working and swimming in constant rotation. It turns out that training for long swims while on research leave (as I was for my English Channel swim) and training with a full teaching workload, a big admin job and an endlessly unwritten book are two very different beasts, and I have found myself wondering whether it's even realistic. It's certainly felt rather inhumane at times this term. I have even been thinking about pulling out of one or more of my swims for this year (crazy talk....but it's been a tough term!).

And then two things came along. Firstly - the sunshine! It's about time, but at last, Spring is well and truly in the air. I can almost hear the water warming up, and the nights of trudging to the pool in the cold and dark will soon be replaced with the open water evenings. And secondly, Emma France posted this video - a slide show she made for the CS&PF dinner last Saturday (which I wasn't able to go to, but which looked like a good night). In many ways, training has been a bit of a chore lately than it should be - more like work than leisure. But this reminded me of the reasons to stick with it. Only 5 weeks to the Cabrera Channel, with plenty more fun to come.