Our new toy arrived just before I went to Malta and I hadn't had chance to play with it until today. 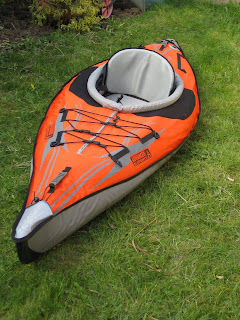 It's an Advanced Frame kayak - a hybrid between a folding kayak and an inflatable - which has the advantage of being quite sturdy (because of built-in aluminium ribs), but easy to transport and quick to assemble. You just unfold it and pump it up via 7 separate chambers, then when you're done, you deflate it, fold it back up, and put it in its bag. 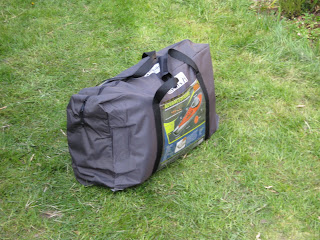 Peter has been incredibly supportive about offering to provide boat support in some races this summer, but doesn't want to have to deal with a heavy rowing boat (our trial session at rowing on Derwentwater last year convinced us that this wasn't a good solution!). We don't have the storage space for a solid hulled kayak, and Peter was pretty adamant that he wasn't going to accompany me in a regular inflatable (or as he described it, "a big lilo"). So this is our compromise, and now we can't wait to get it out on the water.
Posted by Karen Throsby at 12:07