In this morning's Guardian, there's a long feature on Davina McCall, her recent Sport Relief antics and her troubled personal history. I've written before about the now infamous scenes of her being dragged, limp and cold from Windermere and the rather tasteless spectacle of people looking on and applauding and cheering as she is hauled ashore, but once she'd finished the 'challenge', everything went relatively quiet and that was that. But then, of course, along comes the inevitable BBC documentary - "Davina - Beyond Breaking Point for Sport Relief" - scheduled for 20 March, 2014, prompting a PR drive, including the article in the Guardian.

The article talks about how hard the challenge was, how she was persuaded to do it in the first place, and then dwells lengthily on her own troubled history and her difficulties in coping emotionally after the 'challenge'. There are a couple of things that really bother me about this in relation to Sport Relief. Firstly, I dislike the lack of care directed towards the 'celebrities' who are drawn into these ventures, and for whom withdrawing from a challenge becomes increasingly impossible as the PR intensifies and the money rolls in. In McCall's case, this includes lack of attention to her obvious emotional fragility as well her physical well-being - to undertake a swim like that without the appropriate training or capacity is just an unnecessary risk, and someone should have taken responsibility for this and put a stop to it before it even started. Sport Relief is no better than some of the worst reality TV shows in this regard, exploiting the fragilities of others for the sake of some good TV.

But the second thing that I dislike about Sport Relief is that idea that these celebrities have to see the suffering of others first hand to inspire personal suffering through voluntary physical activity which will in turn inspire donations. McCall tells us in the interview that to persuade her to undertake the challenge, they took her out to a project in "Africa"to see the suffering of women and children directly; talk about moral blackmail...and a rather offensively strategic use of the suffering of others. And in a photo on her Sport Relief pages, we see her empathetically observing a black mother and child "first-hand". The filename for the photo when you right click on it includes the word "motivation", but it's not clear whether this motivation is for McCall or the viewers. Whichever it is, it still seems spectacularly tasteless to use the individuals who are being 'visited' by McCall for motivation to undertake a voluntary physical challenge. The paralleling of the two very different kinds of suffering is crass and discomforting; it's an uncomfortably colonial image whereby the suffering of disadvantaged others is legitimised by the witnessing of a white women they have no reason to know or care about. 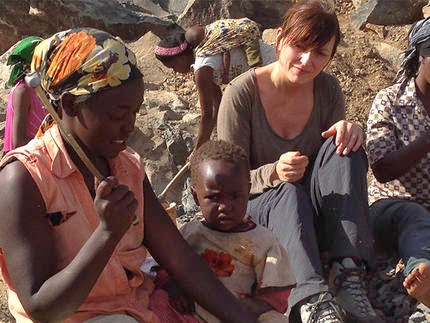 I am sure that McCall is a woman of compassion and that this was a terribly moving experience, but why do these celebrities need to go out there? Do they really lack the ability to imagine such suffering unless they can actually see it for themselves? How much money was spent achieving this act of compassionate spectatorship? So this is why I dislike Sport Relief - because it repeatedly insists on the suffering of others being narrated and witnessed by 'celebrities' who see it "first-hand" and then gain motivation from it to undertake some entirely voluntary (and status-building) suffering which is then exchanged for donations. What does it say about us that we need that middle step at all?

The Guardian adds one final, disconcerting twist to its representation of the whole affair - these photos: 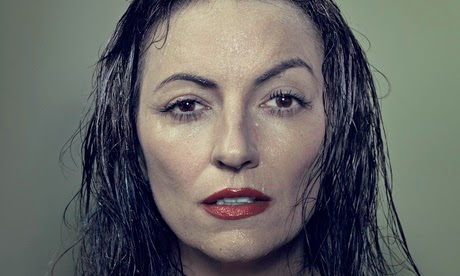 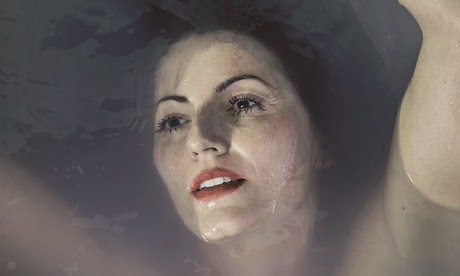 Both of these presumably are intended to evoke the Windermere incident. In the first, she looks beautiful but bedraggled, but in the second, she is depicted as drowning, or possibly even drowned, since she is staring ahead even while her face is largely submerged. Especially this latter is a horrible image which is not only extremely tasteless, but also exaggerates symbolically the suffering of the Windermere event. Horrible.

I don't think all charity is bad; nor do I think that McCall is a bad person to have been involved in this; and I'm sure that some good is done with the money that is raised from these ventures. But I think that this whole affair should give us pause for thought about Sport Relief's use of both the involuntary and voluntary suffering of others and the relationships between them that are produced and marketed to us as "motivation".