It has been the summer of Did Not Start (DNS). Unlike last year, when my Geneva DNS materialised right before the scheduled swim and towards the end of the season, this year, the writing was on the wall by mid-June. This left me with a non-swimming summer of watching milestones in my Geneva plans come and go; it was a long summer of wishing it could have been different. I've had several DNF's in my swimming career, and I haven't enjoyed any of them, but for me, the DNS is a more intense disappointment. Last year's accident-induced non-start in Geneva didn't help with this - from the outset, it made this year feel like more was at stake, making the fall harder when it came. The impact of all this was magnified by a simultaneous volley of other events. As I mentioned in my previous post, the death of a much-loved pet, the spectacular, scary and expensive structural failure of our roof and the terrible political climate of Britain in the shadow of Brexit (not to mention the US political landscape) all piled on, and the general stress and upset caused the wrist injury to cascade around my body, creating new and preoccupyingly painful problems in my neck and upper back that have ended up prolonging my swimming hiatus far longer than the original wrist injury would have. I felt wrecked and ragged, and with my 50th birthday approaching in January, I felt terribly old and creaky. In the moments when I felt most sorry for myself, it all seemed like a confirmation that I'd had a lucky run with swimming, but that my aquatic masquerade had been exposed; I felt like I had lost something very important to me that I didn't know how to get back.

It's worth saying at this point that I know that this is a very self-indulgent crisis to have. Not being able to do a marathon swim because of injury is a pretty privileged problem to be faced with, and I am also extremely fortunate to have the resources to pay for the interventions from my osteopath, physiotherapist and massage therapist that have aided my recovery enormously. I know that nothing catastrophic happened here. But at the same time, knowing this also makes the material and psychological impacts of injury even more difficult to talk about to others, which can compound the sense of defeat.

So what to do?

What follows is not an uplifting story of triumphant overcoming, or a 'how to' for surviving injury. Instead, it's a short list of the things that I've tried in order to manage my summer of DNS and re-orient myself now that the season is almost over.

1. Escape
This isn't affordable or practical for everyone, but as the scaffolding went up around our house and the hammering began, I took myself and a pile of interesting books off to the Canary Islands for two weeks. I gave my body chance to recover from its various ills, got heaps of sleep, finished off some writing projects for work, and even managed to do some swimming. There comes a point when your body's had enough and you have to stop. It was the best decision I made this summer.

2. Social media
I enjoy social media, but over the summer, I found it difficult to be confronted by the constant stream of swim-talk. I didn't (and still don't) resent other people's swimming pleasure or successes, but for this summer, I wanted to take a step back from it. I came off Facebook, and temporarily muted a number of very swim-focused accounts on Twitter. I also muted any accounts that regularly post sporting motivational quotes and gifs - I find these annoying at the best of times, but the relentlessly trite attribution of swimming success to the power of mind over matter is positively insulting when you're injured and no amount of positive thinking is going to fix things. So I just turned them off. I kept half an eye on some events, and there have been some truly incredible swims this summer, but basically I took a long breath of fresh, social-media-free air.

3. Volunteering
I resisted the desire to hide away from swimming entirely, and instead, volunteered to help out with several BLDSA swimming events in the Lake District - some kayaking, some time-keeping and marshalling. This allowed me to keep a toe in the swimming world, and also forced me to confront the utterly mundane reality of injury as an inevitable part of an extreme sport like marathon swimming. It also gave me some extremely memorable moments: kayaking for 74-year old Bryan Finlay in the BLDSA Coniston Vets race and seeing him finish in spite of fierce winds and cold conditions; spending 4 hours in a kayak in the middle of the night on Windermere on a beautifully clear, calm night, guiding overnight 2-way swimmers round the turn buoy and watching meteor showers; and kayaking for Patrick Smith for his successful length of Ullswater. I also managed to capsize just metres from the finish of Patrick's swim - what I lack in kayaking ability, I try to make up for with enthusiasm. Volunteering is what makes the swimming world go round, so injury was an opportunity to help out and still be part of the fun and challenge of swimming, even from the sidelines.

4. Stroke correction
Thanks to the ministrations of the various professionals who have helped put my ailing body back together again, I'm now pain-free and good to go, but the original wrist injury is most likely the result of a stroke defect, and the only way to prevent it from happening again is to fix it. So last week, I went to see Swim Smooth coach, Emma Brunning. I've worked with her before, and like her thoughtful approach and sharp eye. I went in convinced that my habit of splaying my fingers on entry and then snapping them shut before catching was the problem, but the video showed an additional, and much more likely, culprit - my bendy wrist: 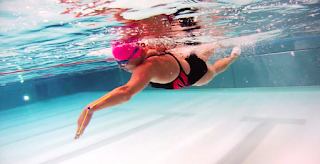 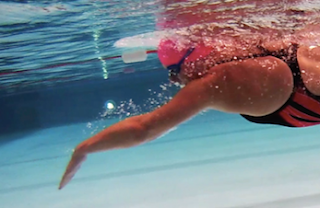 The video shows an unmistakable tilt of the wrist downwards at the beginning of the catch phase; this then straightens up again as I hinge from the elbow to continue through, but repeated over thousands of strokes, this must have been placing incredible strain on my lower arm. There's a small chain of problems that are connected to this (including my splayed fingers and a bit of a dead spot at the front of the stroke on the left side) and these are now the subject of daily drilling in order to break bad habits and hopefully forge new ones. It feels like it's going to be a long job, but I have to confess to quite enjoying this kind of work - it's very consuming as a task and feels constructive after months of relative inactivity.

As I write this, I don't yet know what, if anything, comes next. I am nervous to take on another long swim after two disappointing years of DNS, but I love long swimming and think I'd regret it if I let the fear of it going wrong stop me from trying. And I still haven't swum through a whole night - something that I'm itching to try. I also feel like my 50th should be marked by something ambitiously fun. We'll see.

For now, I'm relieved that the summer of DNS is drawing to a close and I can turn my attention to my next adventure - a year of research leave, courtesy of the Leverhulme Trust, to work on my new project, "The Social Life of Sugar". That...and the drilling, and whatever comes next....
Posted by Karen Throsby at 08:36